It can’t be overstated: This movie depicts a universe in which bees are uncannily human. They speak English, they have technology and family units, they have furniture and clothes, they even have their own version of Larry King. But the beekeepers in the movie are inhumane. One benefit of the doubt can be given to the beekeepers: The bees have a policy that, until the events of the movie, they don’t speak to humans, but even so, these beekeepers see the bees who have chairs and paintings and still call bees “pinheads”? Not very observant. 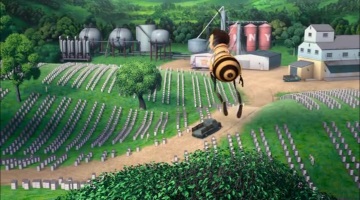 Unlike my ideal beekeepers, these guys aren’t protecting their bees. They are exploiting them. One of them says specifically that “we throw it in some jars, slap a label on it, and it’s pretty much pure profit.” From the sounds of it, they don’t spend any money on taking care of the bees. The hives they make for their bees are represented as unfurnished, minuscule apartments with propaganda pictures of their queen about. The beekeepers have the typical technology, but even that is twisted to jerk-styles. When describing his smoker, one beekeepers says “Ninety puffs a minute, semi-automatic,” which sounds impressive until he adds “Twice the nicotine, all the tar!” These guys are actually addicting the human-like bees to the smoke to keep them exploitable. This “They make the honey, and we make the money” style is pretty abhorrent. Real beekeepers give something back. Also, these guys never portray any fighting or supernatural abilities. They don’t amount to much.

In a way, the real beekeepers in this movie are the bees themselves. But I don’t think that counts.