If I’m going to be doing another year of creating aliens, and I am, I am going to have to mix it up from time to time to keep my interest up. This month, I’m going to retrace my steps, going through all the previous Super Sunday themes, but with aliens. This week, Superheroes: 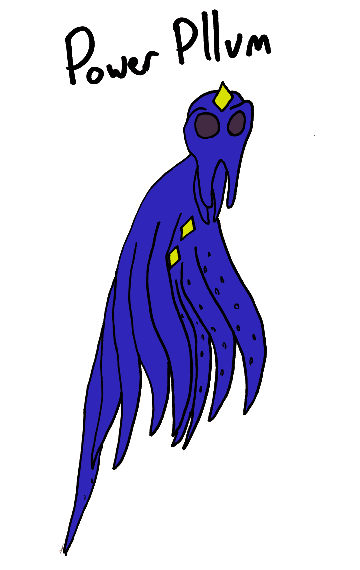 A young Pllvm named Vmplupl was roaming through a coral forest one day when she discovered a cave that she had never seen before. Looking inside, she found a glowing rock that pulsated with otherworldly energy. Though fascinated by the sight of the beautiful stone, Vmplupl soon fell unconscious. When she awoke, she had drifted some way away from the cave, only to return and find the rock gone. The energy of the stone, however, seemed to live on inside Vmplupl’s body. She soon discovered that she had gained amazing speed, strength, durability, and other powers. Using these powers to fight crime and avert disasters, Vmplupl has become known as the Power Pllvm, a champion for the downtrodden and the weak. 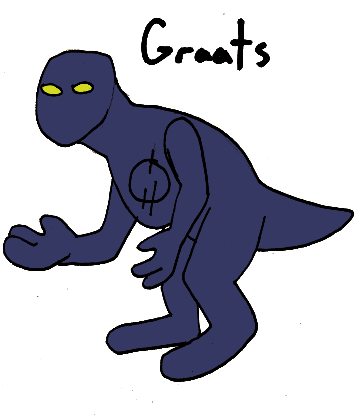 Graats is the product of selective breeding and experimental nurturing and the best training that money can buy. He is the ultimate Dellwellian soldier, the very peak of combat on this world. Graats served as a loyal grunt for the army that created him, but only because they were fighting enemies that he decided were worthy of being fought. Once they tried to send him against foes that seemed innocent. After that, Graats chose to leave the army and if they thought they could stop him, he said, they were welcome to try. Now Graats makes it his business to bring down criminal organizations that specialize in things like assassination. 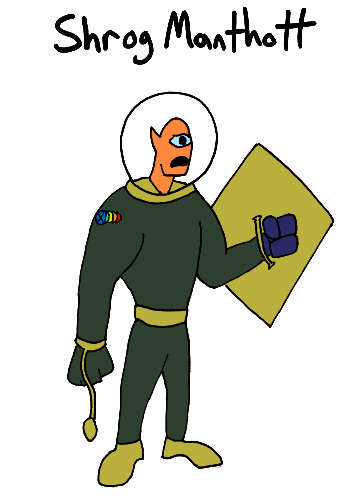 Shrog Manthott is a member of the Myriad Worlds Police Service, which is a law-enforcement agency that not only serves many planets, but also traverses universes to make sure no multi-universal threats can rise to threaten all of existence. Armed with a highly durable shield (that contains incredible computing) devices and a whip-like weapon/restraint that responds to his thoughts, Manthott can face all manner of supervillainous threats. Manthott is a no-nonsense, business-minded, by-the-books cop and respects jurisdiction, so when travelling to a world that is not under MWPS purview, such as Earth, his abilities are limited. But that doesn’t mean he’ll give up. Shrog Manthott will keep doing his job until the moment he dies.

Universe: From beyond the Local Multiverse, but living in Universe White