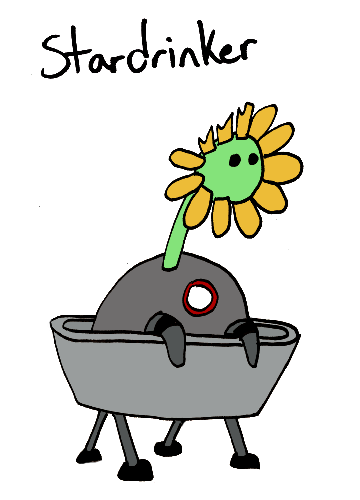 This species doesn’t speak any kind of sound-based language, but in their travels through space, they have met the Strondovarians and their word describing them would translate as “root-folk” so we’re going to use that. This species evolved in the soil of their world as a clumpy, slow-moving thing whose main advantage was their ability to grow plantlike appendages. The “flower heads” seen as a standard part of modern Rootfolk are just limbs they can grow to contain eyes. If you destroy that flower, they’ll be blind until they grow a new flower head, but the important parts of the Rootfolk are under the soil. And today’s Rootfolk keep their soil in robotic bodies that allow them much more mobility. They’re a very old species and have been travelling over the galaxy spreading to other worlds, coming into conflict with other species, and fighting space wars. 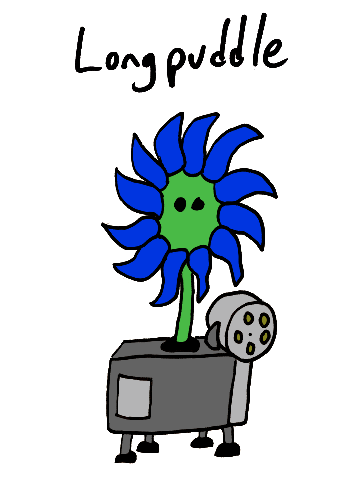 Stardrinker is the captain of a Rootfolk spaceship, exploring the galaxy to find new inhabitable worlds. The Rootfolk are conquerors, so if those worlds are already inhabited, that doesn’t bother Stardrinker. Only recently have the Rootfolk discovered species that are actually able to rival them in technology. It has not gone well.

Longpuddle is a soldier who serves in the Rootfolk space army, conquering alien worlds. Longpuddle is a veteran of a war that involved the Strondovarians and the Omnivoroids, but also another mysterious species that made no attempt to communicate and which was much more advanced than any of the others. After intense warfare, the mystery race retreated for some reason and the other sides ceased hostilities. To this day, Longpuddle is confused and terrified about that mysterious alien race. 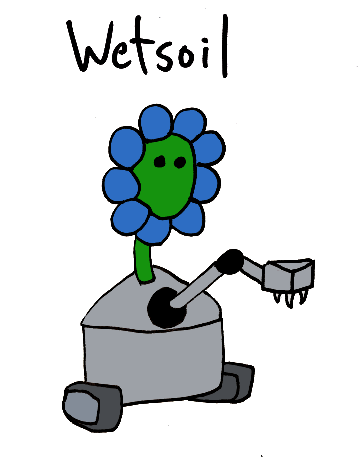 Wetsoil is a scientist who is studying the remains of a species that was wiped out by the Rootfolk several generations ago. Seeing how fascinating the species had been makes Wetsoil realize that driving them to extinction, causing the loss of a unique culture and preventing them from adding anything more to the universe, might be… kind of a shame.

A Fact About Rootfolk: The Rootfolk have a religion that puts a strong emphasis water and soil, and considers freezing to be the ultimate symbol of evil. It has been quite unnerving for them how many planets they’ve reached that are nowhere near so warm as their homeworld.