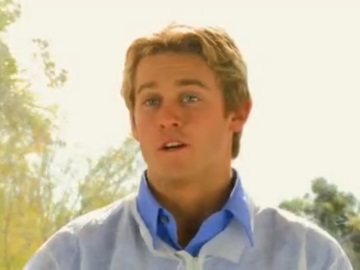 Bees are disappearing and something needs to be done about that. “1313: Giant Killer Bees!” is a “movie” that uses that as the setup for its “plot”. In an attempt to give bees the boost they need to survive, some professor has shipped a bunch of handsome students to a tropical compound to try to fix bees with experiments. Paul is the only beekeeper in the project, everyone else being a mere scientist.

Well, the experiments result in giant bees that turn people into zombies and Paul dies almost immediately. They can’t all be winners. But hey, the movie says that he’s basically one of the only competent people involved in the project. He had nothing to do with the injections that caused the mutations. The fact that he removes his protective mask while running away from a giant bee could be a sign of stupidity, but maybe he can just gauge how useless it would be against a giant bee, right? Could be. Wants to free up his peripheral vision? Maybe?

Anyway… The giant bees cause the end of the world.

Two Honeycombs out of Five. He seemed to be a functional beekeeper, but in the face of the supernatural, he could not hold his own.