Both of today’s characters are from the cast of the Hateful King, one of the things that has come out of Super Sunday that I most want to write. Apart from the original post of the guy, other members of his cast can be seen here.

To recap: The Hateful King is a demonic ruler who is trying to conquer a contemporary European nation called Thrakodacia, ruled by the noble King Balus. 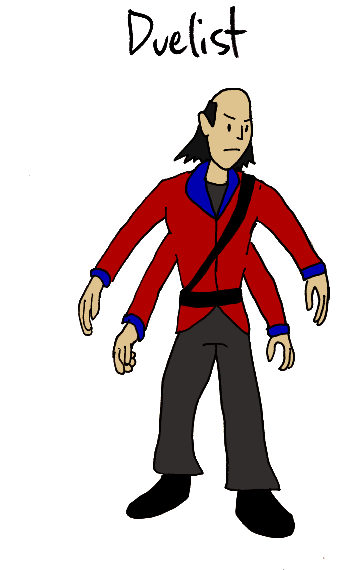 Mystically endowed with extra limbs, the man who goes only by “the Duelist” is the Hateful King’s official assassin. Skilled with all manner of weaponry, but especially swords. Though he uses this skill in service of a particularly leader ruler, he considers himself a man of decency and ethics. Where most assassins would consider stealth and subtlety a positive, the Duelist would not dream of killing someone who doesn’t know he is there for them. When confronting a target, he will declare openly his intentions and the fact that the Hateful King wants them dead. Even with this moment of advance warning, the targets are rarely able to change the fact of their oncoming demise.

This guy got the baldness thing going. And not even a nice baldness. I feel like most of the Noble Sword Guys in fiction are classically handsome, so I didn’t want to go that way. Sure, it also annoys me when bad guys have to be uglier than good guys, but I can’t solve every individual problem with every character, can I? 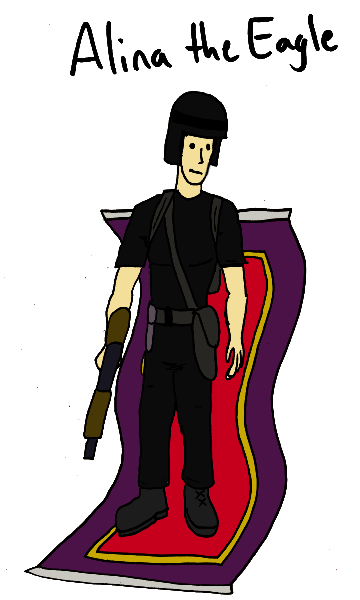 Alina is the leader of King Balus’s special forces unit, the Knights of Thrakodacia. Though they are, in most ways, a contemporary military unit, there is an element of the supernatural to them as there is in all things in Thraokodacia. In the case of Alina, it is the magic flying carpet she owns. Giving her the power of flight, and thus the ability to strike from the sky, the carpet has earned her the nickname “the Eagle”. Leading the Knights, she is responsible for holding off the Hateful King’s forces and advising her King on the best strategies for opposing the villain.

Those who know me will know that I’m into magic carpets. I don’t even know why. But because of that, the idea of a modern soldier riding on a magic carpet was one of the very first ideas I had when I mentally put together the whole Hateful King thing. Alina herself would have been in the first Supporting Cast thing, if I were more comfortable drawing a magic carpet. One can only hope that if I ever told these stories for real, I’d have an artist who can do them justice.