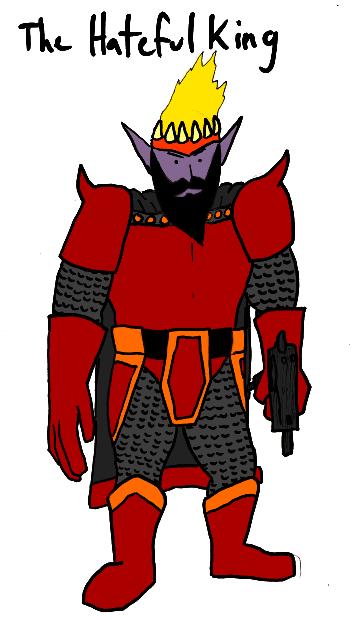 The one now known as the Hateful King was conceived during a tryst between an immortal magic user and a demon meeting in a spiritual plane. The future King’s mother was a messenger demon, a go-between between earthly wizards and a powerful demon, the Fear Fomenter. Born and raised in the demon realm, he was put into service of the Fear Fomenter, fighting against other demons who tried to muscle in on his turf, though the other demons mocked him for his partial corporeality. In his thirtieth year, the Fear Fomenter traded him to a human wizard. He was on Earth for the first time as a slave and being forced to build a castle alone, by hand. Doing this, he grew strong, and watching his master, he learned magic. After years of slavery, he was powerful enough to overthrow his wizard master. And after that he opened a rift to the demon realm and killed the Fear Fomenter. Claiming the castle as his own, the Hateful King now had an army made up of the remnants of the wizard’s goblin hordes and a fear demon mob. He looked at the world around him and decided, he would take it for his own.

The sharp-eyed among you may notice that this guy is in color. I’ve been toying with coloring some of my previous Super Sunday sketched and, while I don’t know how to make it look less messy, some of the results please me. I guess from time to time when I feel like it, I’ll throw a color sketch up on here. Why did this guy deserve to be the first with color? Well, as of this writing, I think there is no story I’d rather be writing than the story of the war against the Hateful King. If I had an artist who wanted to work with me, this is the first idea I’d pitch right now. 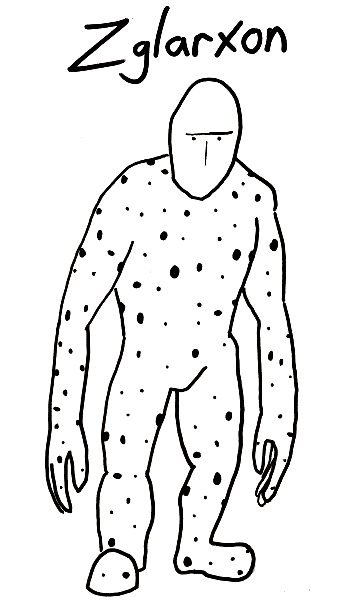 A walking mass of space matter that resembles a color-inverted starry sky, Zglarxon is not from around here. Spawned in some anomaly deep in space, Zglarxon has come to Earth with an apparent mission, though its nature is not understandable to us mere mortals. Often it appears to steal rare elements and using them in constructing strange machinery, often in places that cause trouble for humanity (it seems to prefer building its structures on city streets). If it completes its machine, it will often leave. If the machine’s operation is impeded, it will attack.

Given the “inverted starry sky” description I gave above, Zglarxon is practically colored as well. Hooray. As a mysterious space-thing with unknowable motives, Zglarxon is a counterpart of the Orbzoid. What makes Zglarxon a bad guy and Orbzoid a good guy? The Orbzoid seems to help people on occasion, but Zglarxon barely notices their presence, uncaring as it causes harm to achieve whatever it is trying to achieve. And if someone stands between Zglarxon and his goals, Zglarxon will become extremely violent.