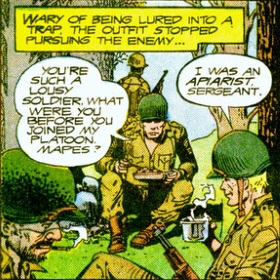 Hey, remember World War Two? It was kind of a big deal back in the day. Were there any beekeepers in there? Of course there were! Today’s beekeeper is from a story called “Hellfire by Night” in issue #278 of a series called GI Combat from DC Comics. It’s August in France in ’44 and an American outfit is trying to bring down a panzer tank.

Beekeeper Eddie Mapes is a private in the unit, but he isn’t very good at it. His Sergeant sees him as a worthless klutz and makes sure that Eddie know it. When the tank makes a sudden night attack, Eddie runs off into the woods and the Sarge thinks he was deserting, so he attempts to have him tried. 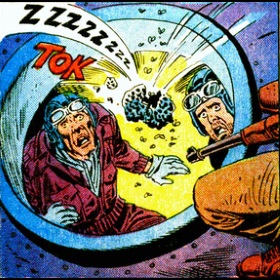 But actually, Eddie had never intended to desert. He’d actually gone out into the woods to find a beehive. Sarge considers this the craziest thing he ever heard, but the unit’s Captain decides to give him the benefit of the doubt and Eddie gets to go ahead with his plan. The next time the tank attacks, Eddie crawls stealthily up to it, climbs on top, opens the hatch and throws his beehive in. The Nazis are driven into a panic by this sudden bee assault and crash their tank and die. Promotion ahoy!

Note that Eddie could probably have done this plan just as well with a grenade. Or he could even have used the gun that he brought with him. But that ain’t how beekeepers roll.

We don’t know all that much about Eddie. He’s probably at least a normally successful beekeeper, but what about supernatural powers? Well, he holds on to the beehive for hours without so much as being bothered by a bee, so either they knew he was able to keep them calm (smokelessly) or they were just cool with him to begin with. Also, the fact he was able to find the beehive in the woods in the first place could be a sign of some sort of bee-sense. Nothing that raises him to the potential demi-god status of beekeeping, but it makes up for his initial failures as a fighter.