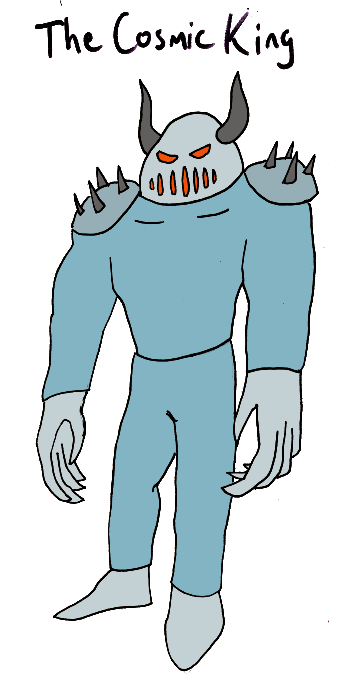 Exposed to the same otherworldly energy that created the Cosmic Chief, the Cosmic King gained similar powers. But instead of remaining on Earth, this newly empowered individual withdrew to a pocket dimensional realm of his own creation. Kidnapping a number of innocents to serve him, the self-appointed Cosmic King ruled over a mentally-crafted realm, that resembled a medieval fantasty land, for centuries until the arrival of the superhero Justice-Man changed things.

Justice-Man, as I have mentioned before, is the most fleshed-out superhero I created as a kid. I used July to do Justice-Man-related heroes during Superhero Sunday year, and I used it to do Justice-Man-related villains, but I didn’t think I’d have enough material to do it in Supernatural year, since I created Justice-Man when I thought hard-sci-fi was the best way to go. While I would never stoop to limit what can happen in a superhero story now, as a kid, for a while, I didn’t want any magic or aliens in there making things “unrealistic”. So I was prepared to skip Justice-Man until I found a single note referring to this story, accompanied by the Cosmic King surrounded by a handful of demon servants. Well, why not take those demons and turn them into something, I thought. Ain’t nobody around to stop me. 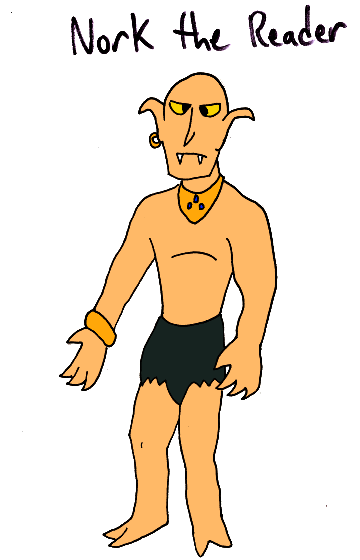 When the Cosmic King created his mystical realm, the thing he spent the most of his cosmic power in the act of creating six demonic servants to help him. Foremost among them was Nork. Even with his vast power, the King knew he needed knowledge to create a whole pocket dimension. For that purpose he stole books written by the greatest thinkers of his day and had them stored in a library in his new castle. Nork’s job was to read and understand all the natural philosophy so that the King could create a functioning ecosystem. Basically, he was the King’s science advisor.

When Justice-Man arrived and began leading a rebellion against the tyrant King, he made a point to reach Nork and tell him about the world outside the King’s realm, and how things had changed. Being familiar with many works of philosophy, Nork had a yen for something else, and was swayed to Justice-Man’s side. He helped Justice-Man design a suit of armor that would function like in the conditions of the mystical realm, but eventually the King noticed that Nork was acting differently, less loyal, more independent. Being the animator of this demon, he was also able to take its life away. Nork died, his energy returning to the King making him more powerful, but he died for a cause he believed in.