I had been using my alien wizards, the Wallfixers, as a “buffer” of easy characters to post when I didn’t have time to do better, but then I ran out. I could make up a few more such alien wizards to build the buffer up again, but instead I’m going to introduce the Efmon family. 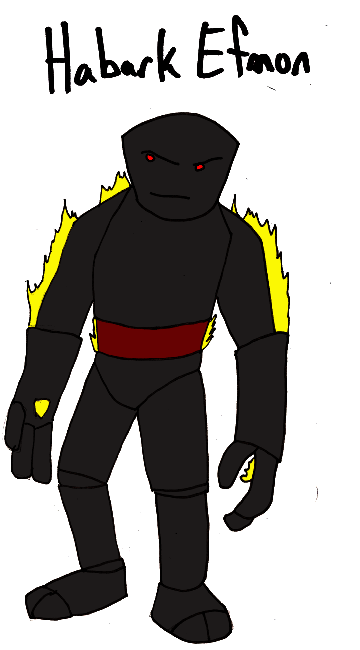 The Efmon family are worshippers of Thalamaya, a vast an powerful godlike being. At their Oath-swearing Ritual, when they pledge their lives to the service of their master and the destruction of all others, they are transformed and given powers. When Habark was transformed she gained a metallic exoskeleton and a heat within that allowed her to start fires. She was still very young as she used this ability in battle, trying to burn the world in her master’s name. The Efmons and their allies very nearly won that battle, but did not. Once the tides turned, it turned hard. Habark herself was badly injured and dragged to safety by her family. Resting up, Habark joined her family in an exodus, leaving the world they lived in to find ways to serve Thalamaya elsewhere, though she longs to return to the realm she was born in and exact revenge on those who drove her away. 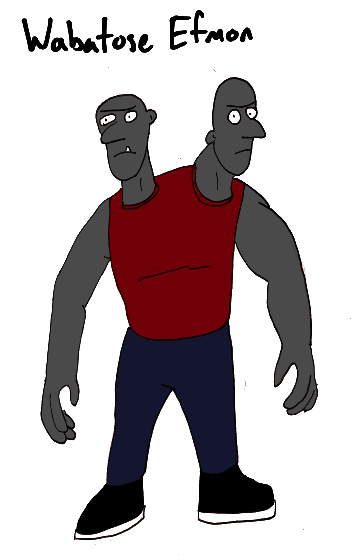 Wabatose is a standard dumb-but-strong guy. His Oath-swearing mutation granted him a massive two-headed form and superhuman strength. Wabatose was generally assigned to guard things that the Efmons felt might be under attack, such as castles or forts, and he proved himself quite effective against enemy armies. When the Efmons lost the war, he guarded the temple in which his family fled through an inter-dimensional portal. As one of the last to leave, Wabatose earned the respect of any of his surviving family members and has been made head of security at their new secret location.

Most of the time, a two headed character is depicted as having two minds. Not Wabatose. This is one consciousness with two heads. I just gotta be different.