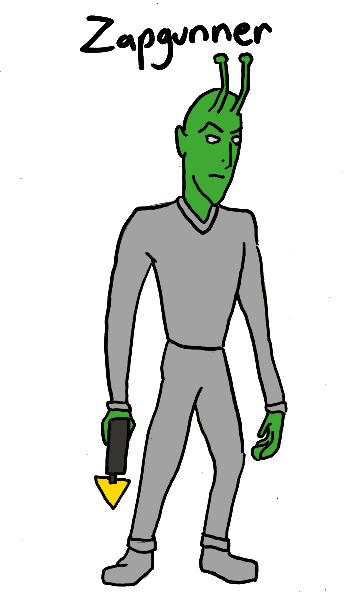 With his green skin, antennae, and high-tech pistol, the Zapgunner is, in fact, not an alien being. Bernard Einhorn was a feeble two-bit conman, scamming people in bars just to get by. During one such con, Einhorn was trying to convince a scientist that he had proof of extraterrestrial life. He had no such thing, but his claim was overheard by an actual undercover alien, who thought his cover had been blown. In a panic, this alien arranged things such that Einhorn would be trapped in an apparently alien form, distracting the scientist while he made his escape.

And so Einhorn was transformed into an alienoid form, but he also found the real alien’s raygun. Quickly noticing its power, Einhorn was able to escape the scientist and start using his strange new energy weapon to go on a crime spree he would never have been capable of when he was a frail loser criminal. With the help of this strange fortuitous transmutation, the Zapgunner had his the big leagues. Once barely worthy of the notice of the police, he is now an opponent of the Guild of Crime Fighters. 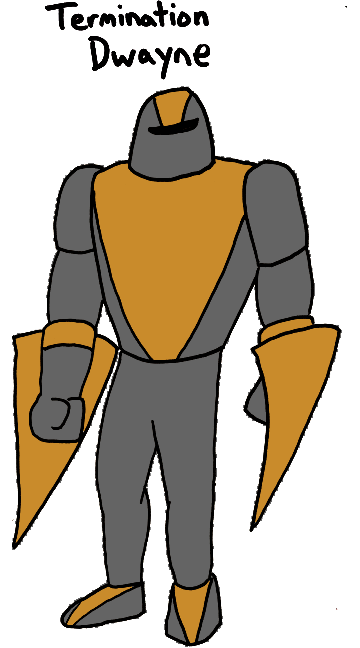 But having a powerful suit of armor capable to bringing down buildings and standing up to military shelling has not made Dwayne’s ambitions any grander. He is still more likely to rob a liquor store than to try to conquer the world. To make matters worse, the bond between Dwayne and his high-tech battlesuit functions even from a distance. Even when HAULER brings him in and Dwayne is separated from his suit, he can mentally control it to come and break him out again.

The name “Termination Dwayne” is something that I thought up very young, and a sketch of the character has been in my files. Now he gets his chance to shine! Or whatever. Dwayne’s full name and the fact he was a drunken loser were all there in my notes with the sketch, so I didn’t have to add much here tonight. I tied him to HAULER because a drunken crook seems like the sort of thing a cop-powered robot would be used to arrest.