In the interests of working through my catalogue of characters a little quicker, today I’m going to introduce not just a couple of heroes, but an entire team. Just take a handful of the characters that don’t impress me enough on their own and throw them into a group, right? It works in comics, it will work here too. And so, I give you:

The Guild of Crime Fighters

The Guild of Crime Fighters is not the top-level hero group of their world, but they are still devoted fighters of crime. They’re the street-level heroes who may not be the best, but that just means they work harder. They are: 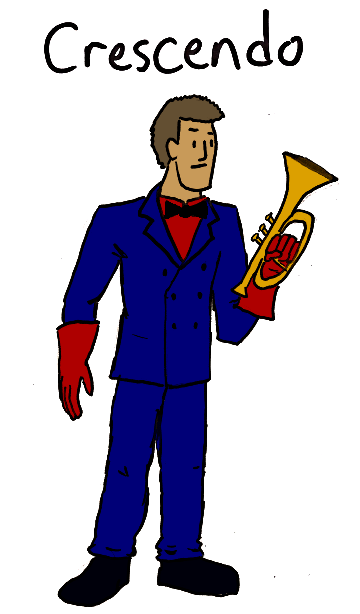 Derrick Addison is Crescendo. He’s a former boxer with a flair for style and a trumpet that can shoot sonic blasts.

I like this guy’s design. I’m picturing his suit being blue and red, though I can’t make up my mind about which parts are which color.

Rosie Stewart is Twinhammer. She’s got superhuman strength and two powerful hammers she can use to channel that strength directly into the faces of bad guys.

I sketched this character and struggled for days to come up with a decent name. Then I just decided to name her after those hammers she’s holding. The fact she has that “T” sort of design going on make me assume it was the right name. 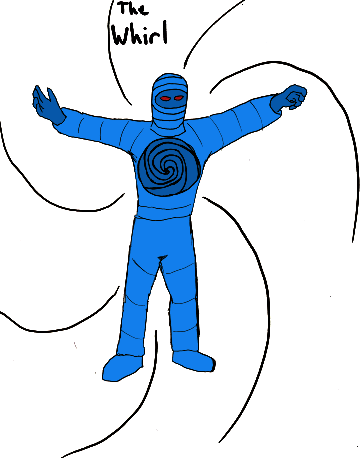 Omar Kapoor is the Whirl. With the ability to control air (or water if he happens to be in water) so that it swirls, he can probably also use it to glide and cushion himself when falling. That sort of thing.

I wanted to draw a character with a vortex kinda thing going for him, but then I drew a sucky vortex. I don’t know how the professionals erase ink on a drawing, but PDR just rolls with it. 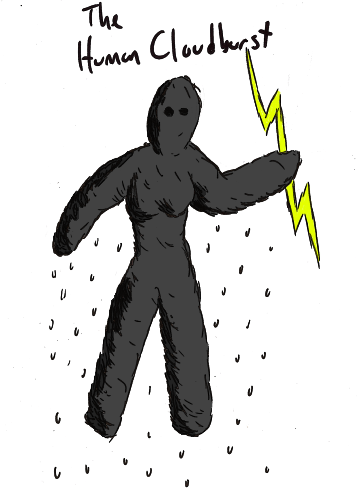 Jessica Nagano is the Human Cloudburst. With the power to “storm up” she covers herself in cloud and can shoot rain and generate lightning and thunder.

This is a character who I think could have merited a solo post, had I been better at drawing clouds. I’m not, so now she’s on this team. There’s a number of superheroes who have names like “The Human Whatever” and I think it is good to have some women in that category, so we don’t think of men as the generic model of a human.

Daniel Garcia is Toughskull. Toughskull is tough and wears a skull mask. He’s a superhuman vigilante who intends to clean up the streets or die tryin’.

This is another case where I drew some hero and had no idea what to name it. Just stuck a couple of words together and we’re done. This stuff is easy. His role on the team would be the troublemaker, I bet. He’s the guy who would always want to go off on his own. And he’d have a rivalry with Twinhammer about who was strongest. That sort of thing.