I have not read the Flash of Two Worlds story, but I know the basics. There’s two universes and there’s a Flash in each of them. They meet up and hang out. Probably punch some dudes. Good times. What I like about this concept is that this isn’t a mirror universe where the guy meets an alternate version of himself, but instead it’s two separate guys (Barry Allen and Jay Garrick) who both have the Flash identity in their respective worlds. I thought that was neat.

I said when I started this whole Super Sunday thing, I said I could come up with enough characters to populate four superhero universes. Well, let’s get that particular claim some backup. Here’s a superhero called the Beam from each of those four universes. To avoid the “Which universe gets to be Earth-1” argument, the Beams have taken to using a naming scheme that is based on the primary colors of their costumes. That’s how we get:

The Beam of Earth Green

Frank Goldsmith was a district attorney who discovered a magical gem. It turns out that this “Beam Gem” gave him the power to fly so fast that he appears as a bright green streak. He affixed the gem into a helmet and became the Beam, champion of justice and right.

This guy is the oldest of the Beams. He’s been doing it for decades and isn’t slowing down (You see?). I’m going for something of a Golden Age Beam feel with him (though he’s not a WWII hero or anything literal like that), but I picture the gem being green, as is his shirt, but he’s just got brown pants. And he probably carries a pistol most days.

The Beam of Earth White

Terry Tork was an astronaut who got caught in a space storm and was bombarded with space-warp energies. Consequently, Terry gained the ability to defy gravity and move so fast that he is just a white streak. He became a superstar space hero, but he got cocky and he hired an agent to help him make more money off of his superhuman status. Sadly, the agent was secretly a spy for an enemy nation and he used the Beam as part of a plan to sabotage a space station and several of Terry’s colleagues were killed. Now humbled and repentant, the Beam serves humanity instead of himself.

This would be the Silver Age-inspired Beam. The costume, I figure, is white with red highlights (his boots, gloves, emblem, etc). The tragic origin is especially typical of Silver Age Marvel styles, as is the alliterative name.

The Beam of Earth Red

Rick Delroy Lewis was a soldier in the British Army who was chosen to take part in a secret experiment. The army scientists injected hundreds of young men with nanotechnology. There were some successes, many failures, and there was the Beam. With the same powers as the ones above, the Beam was used for a variety of covert ops, but he is now a free agent.

This is the bad alternate universe, somewhat like the world of DC’s Crime Syndicate. Luckily I had already created a pretty crappy universe when I made Lex Techno, so it looks like that’s Universe Red. The Beam is a member of Lex Techno’s team. He’s got a mysterious past with the covert ops and all that. His costume is pure red except those black stripes.

The Beam of Earth Orange 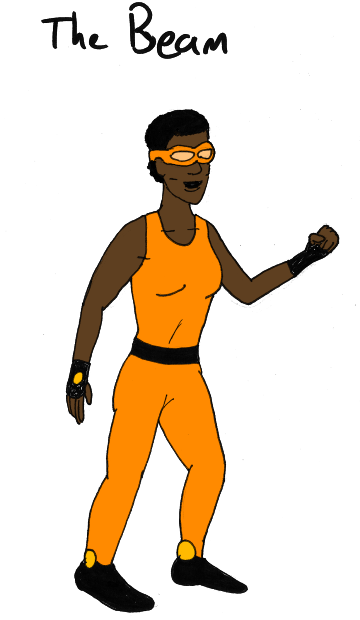 Erika Daniels was a typical college student. Her father, however, was a world-renowned scientist. There was a quantum physics experiment, her father died, she got powers, her father’s partner turns out to have been behind the accident and becomes a supervillain and she fought him and he died. She continued her superhero career as the Beam. She is then recruited to the Megacavalry, the primary hero team on this Earth.

This is just a basic modern-superhero-movie-style origin story (except Hollywood, sadly, basically never goes with a female protagonist). In the current generation of movies there is always a villain in some way tied to the hero’s origin to make things personal, and the villain almost always dies. The recruitment to the Megacavalry would be the after-the-credits moment. Any part of the costume that isn’t shaded black is meant to be orange.

So there’s four heroes, each for a different universe. And that is without even factoring the Hover Head universe into this. And I don’t think I’m halfway through this year of superhero making either.