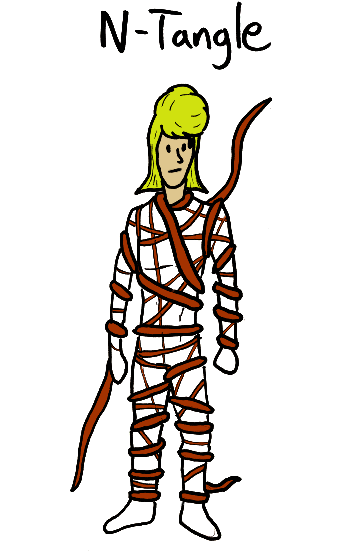 Clarissa Jurgens has created an experimental suit that connects her nervous system to a collection of billions of strong, prehensile nanofibres. Clarissa can control these as if they were a part of her own body, winding them together to create thick cords or using them individually to perform delicate tasks on a minor scale. Using this suit to become the superhero N-Tangle (the N can stand for Nano- or Neuro- or anything else needed, Clarissa insists), Clarissa is living out her childhood dreams of fighting crime, though she soon finds that it is a lot more serious and a lot less fun than she expected. She struggles to stick with it, if only because she doesn’t know what else she wants in life.

Ridiculous hair. Just ridiculous. I don’t even know what is going on there. And also, if I had named the character before doing the sketch, I probably would have tried to work an N onto the outfit. I picture her being able to swing though the city like Spider-Man, using her to brace herself. 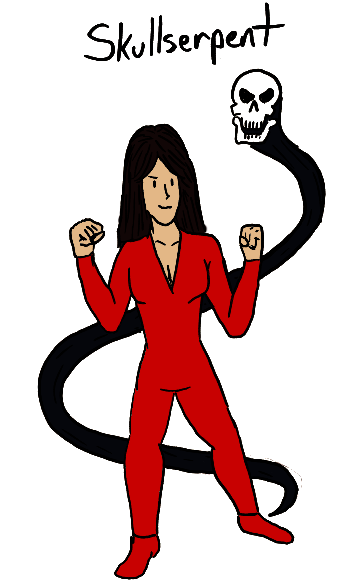 Misti Drake has divided her mind. While she is still in complete control of her body, she simultaneously is within the Skullserpent, a floating snake-like entity with a human skull for a face. Most people don’t have that. Misti uses her mystical second self in a quest to locate and destroy a society of magical criminals called the Night Fellows. This evil order, intent on world domination in the name of their dread leader Karaksus the Uncontrollable.

Skullserpent’s design looks so much like a villain that I considered saving it until I got to the villain creation portion of my Super Sundays. To me, she looks exactly like someone who would be on a group of villains created in the 80s to fight some team of superheroes or another. But I decided not to go that way. The fact that she doesn’t look like a hero is one of the reasons that she should be a hero, I think. I mean, sure, I already did that with Queen Deathknell, but why not do it again?