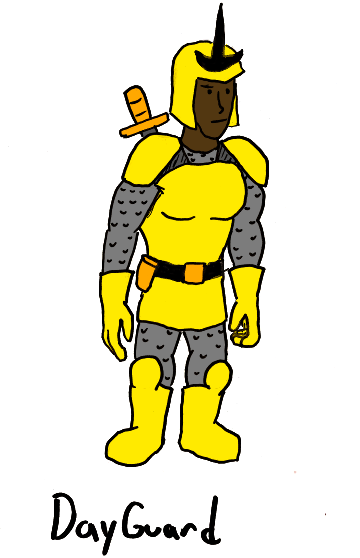 Do monsters only come out at night? Do only shadows hide lurking evil? Is the sunlight a safe place? No. Monsters live in the daytime. Evil exists in in the broad daylight. If there’s any safety in sunlight it is thanks to the Dayguard.

Since time immemorial, a champion has been chosen to protect the world from mystical beings and evil spirits that walk among us. They live in our cities, not our wilderness. They can look like us, they can look like animals, they can look like monsters, or they can be invisible, but they are there. And the Dayguard is the only one who can find them. Many Dayguards of old have been locked up as insane, but Kennedy Light, the current Dayguard, strives to continue her work no matter how thankless.

I’m a nocturnal person and I think of the night as a perfectly pleasant time. Other people don’t feel that way, which is why so many horror takes place in the dark. But that is not a requirement of horror, so when I drew and named Dayguard on a whim, I decided that it might be good as a setting for Daylight Horror stories. 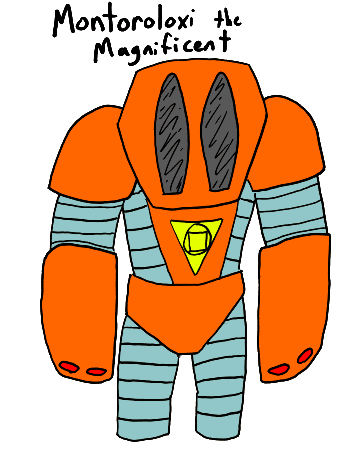 Planet Szunkring is highly a highly advanced world with sprawling metropolises and wonderful technology. But there is another side to Szunkring. The world’s abundant resources are fought over and those who get some use their resources primarily to get more and protect what they have. As a result, those with wealth have power and those without, have little. This division has created a suffering, desperate class of beings, some of whom are fed up and resort to violence, but others who just dejectedly go about their lives, unable to live up to the potential their great world should allow. But then there is Montoroloxi! Having invented a powerful suit of armor that can fly, lift great weights, survive direct bomb blasts, and much more. With this power Montoroloxi is fighting the status quo. Living in the wilderness, Montoroloxi has begun his quest to change things by helping the lower class. Raiding the rich and the corrupt, Montoroloxi finances his quest to build schools and hospitals for those who can’t afford the existing ones. Montoroloxi’s radical actions are not unnoticed, though. He has caught the attentions of the Council of Bosses, a corrupt group among the wealthy, have put their Security Minions into service to seek out the armoured upstart and bring him down. Can Montoroloxi survive to see his plans to fruition?

Montoroloxi is based off an old sketch of mine. The idea that he is some sort of power-armored alien Robin Hood is new, though. What does he look like under the armor? I’ll decide that the day that it actually matters. I have no idea where I came up with that weird idea for how his planet works.