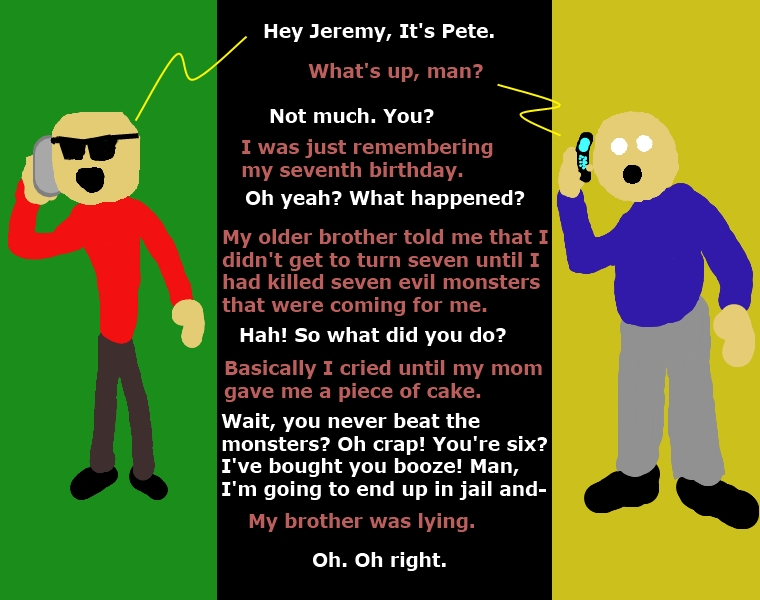 So there is the only strip I’ve got to give you this week.

It is actually Sunday morning instead of Monday morning as I write this. I am using the little function to pre-date a post so that it will go up automatically when its time comes. I’ve never tried it before and I figure that if I’m going to be successful at making sure I get a post up every Monday I need to learn how to use it. It seems… pretty much as simple as changing one number, but I’ll not know for sure until I see this post come up on its own.

Update: And this is Monday PDR. Neat. My time-travel post seems to have gone on without a hitch, so now that is among the tricks up my sleeve. Level Up! So… The time I might have spent doing that post this day was instead spent watching television in the form of the Walking Dead and the Venture Brothers. For the Walking Dead I have to rescind my comments made after I’d seen the first episode that came to the fact that it was good but that since I’ve read the comics I knew the story. As the episodes have gone on I see that they are either doing things differently or I don’t actually remember the early issues of the book at all. For the Venture Brothers it was the season finale and it was good. I am going to miss that show while it is away, but I guess the guys who make it need a break. So I might as well let them have one. The episode also mentioned a Secret President, which amused me considering how recently I started doing this strip.