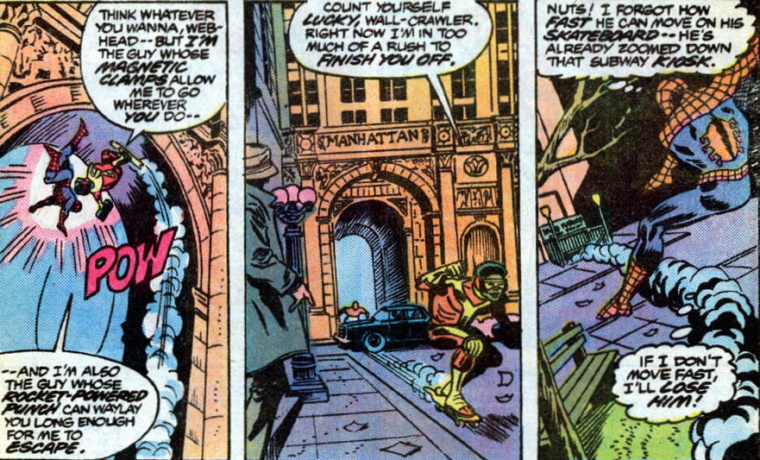 I’ve said already that I don’t want writers to take Robert Farrell and treat him like he’s one of the smartest people in the world. But I want to make it clear I don’t want them to treat the Rocket Racer as if he’s incapable of kicking a little ass.

I get that he’s a skateboard-themed supervillain and your instinct is that he’s a goofy joke character. I can understand that impulse. The inherent goofiness of the character is part of the appeal to me. But this is the superhero genre, people! It’s all goofy as hell! One of the most popular guys is a rich amateur detective who dresses as a bat so he can drive around in a bat and throw little bats at the bad guys. Just because this stuff is goofy doesn’t mean we can take it seriously.

I don’t want Rocket Racer to be one of the most powerful forces in the Marvel Universe, mowing down cosmic enemies with ease. I don’t even want him to be on par with the heavy hitters on the Avengers or the X-Men or whatever. As with his intellect, I want him in the middle. I just want it to be such that if some street-level hero or villain is up against the Rocket Racer, he’s not someone who is taken out in a panel because he’s “lame” and “lame” characters are bad.

Bob Farrell is definitely a loser and probably has only grown to doubt himself more as his career has been a trainwreck, but he is also an above-average skateboarder who has designed clever bits of technology to help him do what he does. If we make enough stories that treat someone like that as a human, readers will learn to take it seriously. Like that amateur bat detective guy.