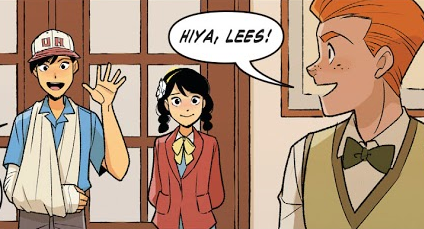 Several years ago, I did a post about the Lee Family, a group of semi-recurring characters who I liked and wanted to see more of. As I have noted extensively on this site, a book called Superman Smashes the Klan came along and retold the 1940s radio story in which they debuted. I’m a big fan of that book and highly recommend it to all Superman fans.

But that radio show wasn’t the only appearance of the characters, I argued. Tommy Lee had also shown up as Clark Kent’s roommate in some Bronze Age stories. I didn’t know then if this was coincidence or not, but this year I decided I might as well get to the bottom of it. I sent an email to Bob Rozakis, the writer of the stories that introduced the comics version of Tommy, and got this reply: “Clark’s college roommate Tommy Lee was named after one of my college friends.” This proves that the 1980s Tommy and his family and their similarities to the 1940s versions wasn’t an homage, it was pure coincidence.

This just makes me all the more certain that these characters need to come back. On a rational level, I can understand that with the thousands of Superman stories told over decades, such coincidences are bound to happen just because of the sheer numbers. I don’t actually believe that the ideas of these characters is destined by the universe to break through and just needs our help to get it to be permanent. And while I may not actually believe it, I’ll gladly pretend to believe it if it helps me justify bringing these characters back.

As I said in the previous post the woman named Lee who served on Metropolis’s “SCU” police force in some 90s comics was a potential post-Crisis version of Tommy’s sister (then unnamed, now known as Lan-Shin “Roberta” Lee). The Lan-Shin of Superman Smashes the Klan is an inquisitive and adventurous young woman, traits that could easily be remade into the traits of a police detective. And I’ll also note that the connection between the SCU Lee and Tommy’s unnamed sister came to me in a dream. Another sign that the ideas are trying to manifest on their own.

I admit that apart from Rozakis’s input, this update is just me reiterating what I already felt. But I still feel it, so why not reiterate? Bring the Lee family back to the Superman franchise. It’s the only way to shut me up about it.