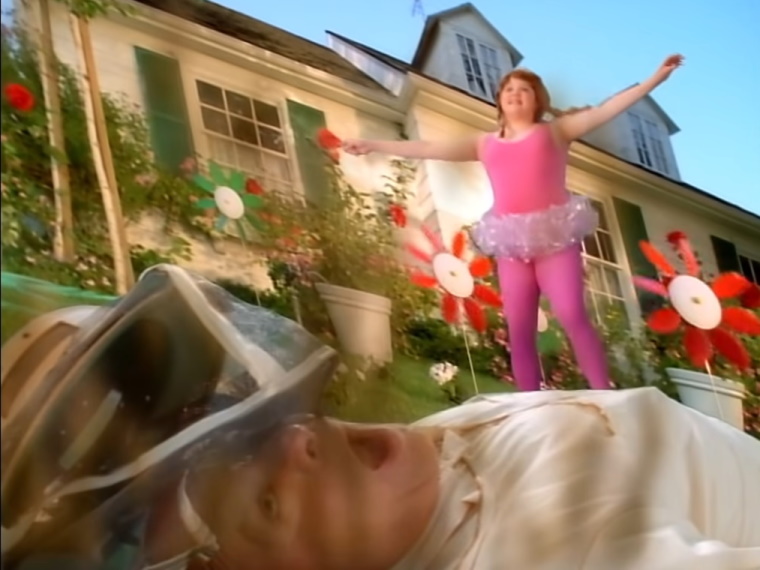 I have no desire to try to make sense of the whole video for the song Black Hole Sun by Soundgarden, it’s an intentionally oblique and surreal piece of work, but I am dutybound to note that it includes a Beekeeper. Said Beekeeper appears for a couple seconds, seemingly dead. How much can I mine from that? Well, let’s see.

It seems like there is an apocalypse happening. The world is messed up and the band has either caused the sun to wipe out humanity, or is just happy about it. Certainly the lyrics “Black Hole Sun, won’t you come, and wash away the rain” make it sound like they’re fed up with the state of the world and instead of actually putting any work into trying to make things better, they just petulantly want it all to be over. Well, no matter the cause, it’s happening. Things are getting strange and the world is dying.

Amidst the chaos we see a Beekeeper, laying still on the ground while a child dances nearby. Relationship between the child and the Beekeeper? Unknown. We’re simply not given that information. It could be inferred that our Ex-Apiarist was killed by his own bees, and I can’t disprove it, but I don’t think so. While the bees are crawling over the lens of the camera, none seem to be on the corpse. We do see non-bee insects attacking others within the video, most notably a couple of kids who were torturing bugs with tweezers and magnifying glasses, but those insects don’t kill anyone. The insect-bothering children are among those sucked up into the Black Hole Sun.

As far as I can discern, the Beekeeper is the only person shown to be dead from a cause prior to getting apocalypsed. If I wanted to, I could even claim perhaps the apocalypse could only happen because the Beekeeper was killed. After all, what do Beekeepers do? They hold together a society. They protect a group of lifeforms so that everyone can benefit. It’s the polar opposite of thinking everything should just die because it sucks. When not burdened by Beekeeper Rage, Beekeepers are intent on actually improving the world instead of letting it die. Perhaps the band, or whatever force caused this Black Hole Sun, needed the Beekeeper out of the picture to make the end come. I don’t know if they murdered the Beekeeper or if they just took advantage after a natural death, but I feel like if that Beekeeper were still alive, he’d be standing between the planet and the end of times.

But none of that’s in the video, so I can’t let that factor into my rating.