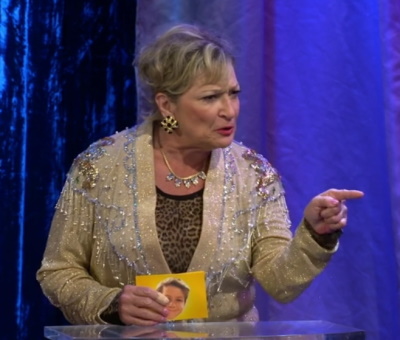 Roz Schotz, better known as Grandma, is a Beekeeper who appeared on a show called Bizaardvark. Played by Ellen Ratner, Roz is the grandmother of Bernie, one of the members of the main cast of teenagers. We’re never told what happened to Bernie’s parents (though we do know that she despises the other side of his family), but Roz is Bernie’s legal guardian.

Raising Bernie, Roz is overprotective in a way she’s not when we see her chaperoning other children. This is no contradiction to her personality however. All indications are that Roz is not usually a parental type and would be fine letting children do whatever they want so long as they leave her alone. At first it seems harsh that she imposes seemingly arbitrary rules such as not being allowed to touch pointy fruit or use hot sauce, but when we see Bernie unsupervised it takes mere seconds for him to stab himself with the pointy fruit and get hot sauce in his eyes. Roz is only as strict as she is because otherwise her idiot grandson would simply be doomed. I can only assume that Roz had no intention of raising the kid, but circumstances forced her to and now she takes the job seriously. 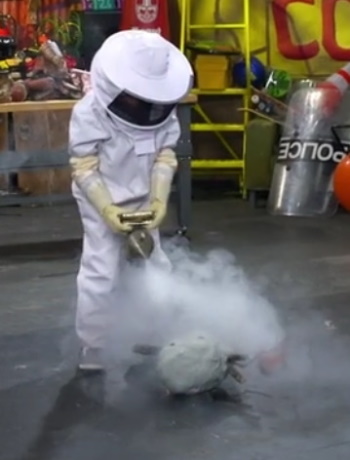 In between the strict rules, she does teach Bernie things in the hope that he’ll develop life skills that will let him survive the world (specifically noting that she won’t be around to help him forever). She pays for his wilderness lessons. She teaches him to dance. She’s even proud when Bernie shows skill at manipulation and lying because those will help him get along in the world. And she’s also taught him some beekeeping skills. Oddly, the reveal that Roz is a Beekeeper occurs in an episode in which she doesn’t even appear. We learn about it when Bernie uses Beekeeping skills that she taught him to smoke a hive. It never comes up otherwise, so we have no idea how good she is at it. But given Bernie’s idiocy at the best of times, if he can be competent from her training, she must be good.

Of course, I like other skills in my Beekeepers as well. Is Roz tough? Heck yes. The show repeatedly goes to the “isn’t it funny that a grandmother could be tough” joke well. Roz is known to be a bareknuckle boxing champion, is in a fight club, was a medic in “the war”, has a flamethrower, and she’s known to the police in six different states. She once beat up a roomful of people in the dark. It doesn’t quite reach supernatural levels, but I would be remiss if I didn’t note that Bernie says his grandmother likes bloody videogames about hunting vampires because “they remind her of her childhood.” He doesn’t know any more about it, but if we had proper details about that Roz could have the potential to raise her score by a whole point! Only on one occasion do I remember her being shown as anything less than super-tough: when she and some kids she was looking after were surrounded by dozens of scorpions. Perhaps she simply has a phobia of the arachnids.

Of course, Roz is unfortunately susceptible to the biggest flaw found among apiarists: Beekeeper Rage. Roz openly admits that she has an anger problem and is repeatedly shown taking her doctor’s advice (do puzzles, enjoy sunsets, and cetera) to try to lower her rage levels. I have to give Roz commendations for being aware of the issue and trying to treat it. She fully admits that she hates her doctor and their advice, so I have to assume that if Roz were still living a life among her “violent friends” she may not even be trying to temper her anger. I think that the fact she’s caring for Bernie is why she is bothering, and that’s kind of nice.

Three Honeycombs out of Five. A solid Beekeeper who cares for her grandson as best as she can.