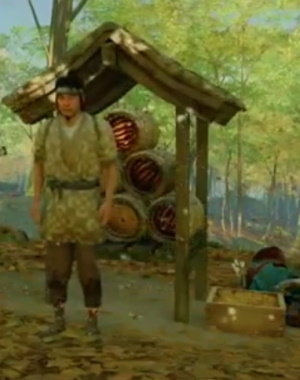 Hachibee is the Apiarist in Distress found in a Ghost of Tsushima expansion. This means he lives back in Samurai Times of Japan (I don’t feel it necessary to bother with a more detailed description of the era at this time.)

At this point I’ve covered enough of these that I could have told you how it goes before even looking: The hives/the Beekeeper are in danger, the game’s protagonist has to save them. It’s done by the numbers and doesn’t deviate.

I can’t rate Hachibee more than a Two for this. That’s the standard for this role. But Hachibee actually gets a little bit more detail than most of his fellows, which makes me wish I could go higher.

It’s all good stuff, but just not enough to escape the surprisingly cliche role of videogame Apiarist in Distress.