Heads up! Got another Scooby Doo-related Beekeeper coming at you!

The crime that we didn’t get to see this time was the theft of a lot of goods from a hotel. Gold chains, paintings, watches. Someone just came and stole a whole bunch of assorted valuable things from a hotel. We don’t know for sure that the criminal was wearing a monster costume, but this is the Scooby Doo universe, so it seems more than likely. And there is indeed a monster-masked beekeeper seen on the cover of the issue, so even if it doesn’t come up inside, I think we have to assume the culprit scared off witnesses by posing as a “Beastly Beekeeper” or “Eerie Apiarist” or something along those lines. 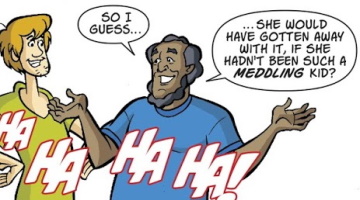 Naturally, when faced with a Beekeeper-themed foe, the Gang would check out the nearby Wilkins Honey farm, owned by one Mr. Wilkins. As the story begins, they find and unmask Mr. Wilkins as he retrieves some of the stolen goods from his hives.

But Mr. Wilkins didn’t do it! 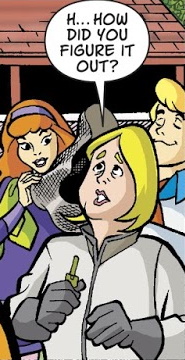 He was framed by one of his honey farm employees! Brittany. She is the one who stole the stuff and hid it in the hives. And what’s more, when the Gang make their first incorrect unmasking, Brittany hatches a clever plan: she has Velma stung by a bee, then uses her “expertise” as a beekeeper to recommend that she be kept in the hospital overnight. This keeps Velma and the Gang distracted and not thinking too closely about their case, while Brittany attempts to gather what remains of her stolen treasures. It doesn’t work in the long run, but it’s a decent plan. How many Scooby Doo villains have actually hospitalized a member of the Gang, after all?

If, as I assume, Brittany was wearing the Beastly Beekeeper mask while she performed her crimes, you could consider it stupid or foolish to then hide the stolen goods at the nearby apiary. But, since she’s trying to frame her boss, it makes sense. As far as Beekeeper-related criminal plans go, it’s not the worst.

Really, I could review these two separately, given they are at odds, but for simplicity I’ve combined them into one. Wilkins, we know, is a successful apiarist who has a whole farm named after himself, so either he’s that good or he comes from a line of Beekeepers. Either way, that’s an impressive start. What gives him the final push from average to just above average is that he gets to hang out with the Gang and deliver the story’s variant on the “Meddling Kids” line.

Brittany is has (again, I am assuming) a Beekeeper-themed costumed identity, uses her Beekeeping as part of her repertoire of tricks, and she’s successful enough that she, as I say, hospitalized a member of the Scooby Gang after making them all identify a criminal incorrectly. The thing that brings her down from awesome to just above average is that she’s a criminal, and I never condone the bad guys in these reviews.

That means both of these Beekeepers get:

3 Honeycombs out of Five each. Just above average.