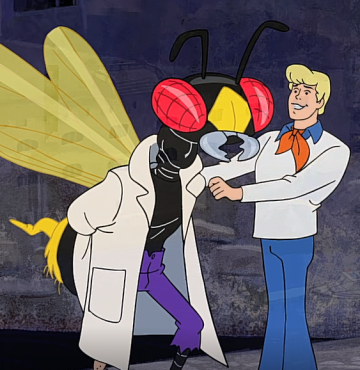 The Bee Man of Alcatraz is a beekeeper and a criminal introduced in an episode of Scooby Doo and Guess Who. Unfortunately, he is only seen at the beginning of an episode, at the end of some off-screen adventure that is being wrapped up in media res. He is unmasked as Bob the Beekeeper.

You might think that this minor appearance would mean I have very little to work with for this review. Not so! We’re talking about a Scooby Doo villain here. I am an expert reviewer of Beekeepers and I have watched an awful lot of Scooby Doo. My knowledge of the abilities of the former and the beloved formulaic nature of the latter mean that I am more than qualified to piece together this tale. 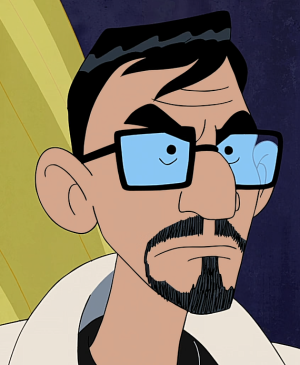 Bob was definitely a beekeeper who worked on or near Alcatraz Island, and he probably had knowledge that there was some manner of secret treasure left behind in the museum that was once the infamous prison there. Perhaps some relative was once a prisoner there and buried it, who can say, but he was definitely looking for something in those walls. He couldn’t very well hunt for treasure with tourists and employees milling about all day, so he did what any criminal would do: he concocted tales of a monster to frighten people away, giving him time to look for his prize. He went with a bee-theme for the monster because that’s what he knows, and it allowed him to use things like wax and bees as part of his ruse. I expect his costume actually allowed him to fly as well.

I think it is a safe bet that when Mystery Inc. showed up Shaggy and Scooby were frightened. There was probably some wax left behind as a clue. It’s quite likely he chased the Mystery Machine around for about the length of a pop song. I figure at some point he tried to sting something and the stinger got caught. And in the end, he was captured in some clever trap.

To review, he’s a beekeeper successful enough as such to be called “Bob the Beekeeper” which means he’s probably at least kind of good at that job. It’s unfortunate he turned to crime, but the fact he has no apparent henchmen means he’s got skills. Those skills aren’t enough to get one over on Scoob and the Gang, but there’s no shame in losing to such an esteemed team of crimefighters.

3 Honeycombs out of Five. It’s worth noting that Bob did not have a speaking role in the episode, so the makers of Scooby Doo definitely need to bring him back, voiced by me.