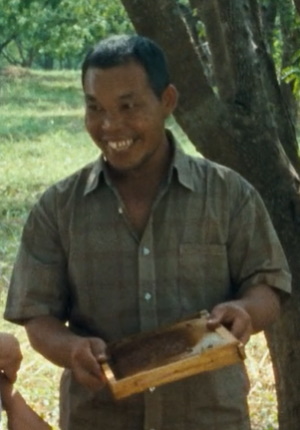 Boonmee is the title character of the film Uncle Boonmee Who Can Recall His Past Lives. He’s a Thai farmer who, as of the events of the movie, is suffering from a kidney illness that will lead to his death.

The film uses a dreamy logic to let one’s imagination run wild, which is neat and all, but it makes it hard for a humble Beekeeper Reviewer to get his facts straight. I like my Beekeepers to have supernatural powers, but it’s hard to judge here. For example, if Boonmee is, in fact, capable of recalling his past lives it doesn’t come up much beyond knowing that the cave in which he dies is one in which he was born in some other life. But reincarnation isn’t the only supernatural element in the film. In the time leading up to his death, Boonmee’s deceased wife comes to visit him as a ghost. Similarly, his long-lost son returns as some form of forest spirit. Before he dies he has a dream of a possible future. None of these occurrences are directly related to his Beekeeping (though he did create his apiary after his wife’s death because it was something she always wanted). He takes all such events in stride, though, which is nice.

It’s easier to judge Boonmee’s personality, and he seems like a nice guy. He appears to treat his workers well and he has less prejudice toward immigrants than others in his family. He considers his illness is a karmic retribution for having killed many communists in war, which I feel is a sign that he has prowess as a fighter (a plus in my reviews) and he has learned that violence isn’t particularly noble (also a plus in my reviews). Furthermore, he feels the karmic retribution is also for beetles he’s killed in protecting his farm, showing his respect for nature.

Before he dies, he tells his sister-in-law to take over his farm. He says “After I die, I will find a way to help you.” I kinda believe him.

Worth noting: The film is based on a book about a man who claimed to recall his past lives while meditating. I don’t know if that Boonmee was a beekeeper at all, but either way this movie is inspired by that man, but is not about that man, so the film’s version of Boonmee still counts as a Fictional Beekeeper.