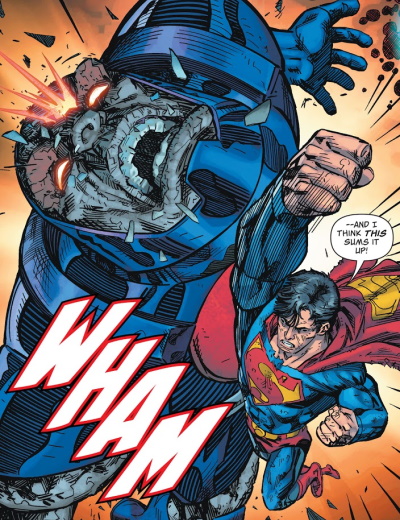 You will often find Darkseid on lists of the best Superman enemies. As I always seem to be doing here, I’m going to go contrary to the popular opinion and say, no he ain’t. And by that I don’t mean that he’s not a good villain, but that’s he not a Superman villain.

Regarding the quality of Darkseid’s villainy, it’s fine. He’s okay. He’s nothing special in my opinion, but I can see the reasons people like him. But he’s at most a “DC Universe” villain, to be dealt with by teams like the Justice League and in my ideal world, he’d be recognized as a New Gods villain, because that’s what he was actually created to be.

Sure, Darkseid first appeared in Jimmy Olsen’s book, a Superman Family title, but I am unconvinced that Jack Kirby did that for any reason other than that was the book he was writing. He wanted to establish his Fourth World stuff, so he did it there. If he’d been writing the Flash or something, he’d have done it there. I strongly feel that Darkseid, and Apokalyps and related story elements, belong in the Fourth World stories. The fact they show up in Superman all the time feels to me as it would feel if Loki showed up as Spider-Man’s biggest enemy every few months, or if the Red Lanterns set up their base in Gotham so they could appear in Batman’s books all the time. Crossing elements can be one of the funnest parts of shared universes, but certain story elements still belong where they belong. And any time Darkseid is a villain to anyone other than the New Gods, I feel like the whole Fourth World concept is being mined and left as a husk of what it should be.

It’s similar to how I don’t want Batman and Superman in stories together. I will admit that good stories have been done with those crossovers, but the ideas are being cheapened by constant exposure.

There are other elements from Kirby’s run on Jimmy that I welcome a lot more. Intergang is nice as a simplification of organized crime and it doesn’t need to be tied to Darkseid (and in several other media, they are not). The DNA Project with the Hairies and especially Dubbilex work well for me because they are a sort of attempt to create literal “Men of Tomorrow” through science, who can contrast and compare with Clark. The Habitat as a wild space outside Metropolis is a great addition, and Dabney Donovan is in keeping with the super-scientists that Superman deals with all the time. I’ve already mentioned that I like Morgan Edge, and even there I cut Darkseid out of what I want from the character. But the Fourth World is a story of its own, and trying to make it a part of Superman’s story weakens the Fourth World and distracts from the Superman elements I want.

Anyway, if you just want a big alien warlord for Superman to punch, use Mongul. If you just want an alien to be providing alien technology to Earth mobsters, use Grax. If you want a cosmic boss with soldiers and minions, use Rava and the Superman Revenge Squad. Use Drang the Destroyer, aka Dr. Supernatural. Use Amalak the Kryptonian Killer. Use the Galactic Golem. Use Intellex the Brain Bandit. Just stop using Darkseid.

And most importantly, use Clawster.