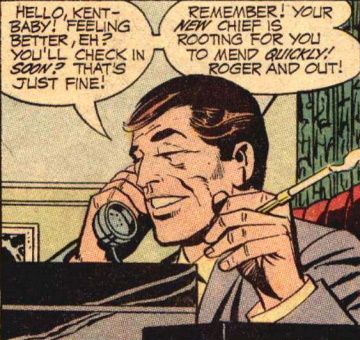 Morgan Edge was introduced in the 70s as the new boss of Superman and friends but then after a while it was revealed he was a servant of Darkseid, a big bad alien supervillain. But here’s the thing: After that reveal, they did a further reveal in which we learned that that Morgan Edge had been a clone and there was a real Morgan Edge who could come back and be the new boss of Superman and friends and who stuck around for the better part of a decade in that role. But why, one might ask, did they bother with that second reveal?

That question is most likely to be posed by people who are only familiar with other iterations of Edge. For example, in the “post-Crisis” era the story was almost identical: Edge was a businessman who had ties to Darkseid, Superman stopped him and the even went further into supervillainy. On shows like Smallville and Supergirl, he’s just a generic businessman with ties to the mob. To people who know Morgan only from these depictions, he’s bound to seem like a boring character.

And I want to be clear, I like it when Superman opposes criminal businessmen. That’s my ideal setup. The list of villains I’d use in a Superman run easily has a dozen of them. But Morgan Edge isn’t one of them, because in the 70s and 80s, after the clone reveal, Morgan Edge stopped being a villain and became a supporting cast member. Someone on the creative staff realized that Edge added an element to the setup. He was a capitalist jerk, but he could also have some depth. We got to learn about his life, and he could present viewpoints that weren’t the same as everyone else, but which didn’t need to end in a fight scene. They did the clone thing so that they could have him around again.

So what’s my point? I guess it’s just that I wish they’d bring him back for that purpose. I’ve said that journalism would play a bigger role in the Superman books if I were in charge and I think it’d be great to have the WGBS news team out there as supporting cast members outside of the main Planet cast, and Edge would be a part of that. That’s it.

I suppose that really this is just me continuing my exclamation that superhero comics need to put more effort into their supporting casts. Is that so much to ask?