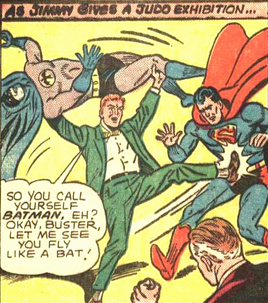 Superman and Batman gotta stop hanging out. I expect, if I were in charge of the Superman books, this would be my single most controversial decree. And that’s saying something, considering that given the opportunity, I’d write Superman as bisexual*, but I still think this would be more hated. Entire generations of fans would be against me on this. I wholly believe that Superman would be better if his stories weren’t a part of the DC Universe.

It’s not just the fact that I don’t care about the DC Universe that makes me feel that way. I mean, it is absolutely true that I don’t care about the DC Universe. I’m not going to offend you all by pretending otherwise, but it isn’t just that. In fact, I think I actually first came to this conclusion from the other direction, because I like Batman. I don’t love him, but I like him fine. He’s got fun villains, Gotham is a decent setting for those kinds of stories, and I enjoyed 60s show and 90s cartoon as a kid. But whenever I encountered stories about Batman among the other DC heroes, it wasn’t the same. It wasn’t what I wanted from Batman stories. I pretty quickly decided I’d like Batman more if his franchise was a standalone thing.

It took me longer to decide that about Superman, but only because my interest in Superman took longer to grow. My primary introductions to Superman as a kid were the Reeve movies and the Lois and Clark show. Neither of those had other DC properties forced in. Let’s say that at that point in my development, I was a casual Superman fan, mostly because I liked goody-two-shoes heroes in general. In my twenties I remember checking out the first season of Smallville, but dropped out not long after that, so I encountered no real big DC elements (it wouldn’t be until I was obsessed that I suffered through the rest of that show). Also in my early twenties, I was drawn to the Silver Age of Superman, when the comics got really weird. That appealed to me and, I’d say, brought me from casual fan to actual fan. There were minor elements from DC, Superman would occasionally hang out with Batman or race against the Flash, but there was so much Superman-specific world building that the DC stuff was easily overlooked. From there, I slipped backward into the Golden Age of the character, when his social crusader nature was at its sharpest and his DC connections were absolutely minimal. That’s the point when I became an obsessed fan of the franchise. I had grown to love Superman, the supporting cast, and even the villains. I made my journey from casual to obsessed all without any real influence from the DC Universe showing in the stories. I don’t know that a fan could do that these days, given that there is no outlet for Superman family characters (or for Batman or, I assume, Wonder Woman or the Flash or whatever else) which is not strongly integrated into a universe of other heroes. Anyone who has become a fan more recently will think that a Superman/Batman relationship is a requirement.

After becoming obsessed, I finally got around to reading the Death and Return story from the 90s. Here I was introduced to still more great cast members and I loved it. But then the DC heroes came along. The collection I was reading included some Green Lantern issues, relevant to the overall plot, but with a focus on Lantern and his stories. I actively did not care about Green Lantern’s stories and had to slog through wishing we could get back to the people I actually wanted to read about. And that’s the exact problem I still have to this day. Any time I’m reading a Superman story and Batman or someone shows up, all I can think about is how many pages I have to flip through that could have been used for Lois or Jimmy. Imagine if every time someone was watching Game of Thrones (or whatever else is popular and people watch these days), they had to sit through fifteen minutes of each episode watching the cast of CSI: Miami or whatever. It’d be amusing once or twice, but every episode? Nobody wants that.

But even beyond DC’s other characters eating up precious page-space, the DC Universe is constantly exerting itself on the stories. For those who are lucky enough to not know, DC has had, for decades, a problem with wanting to maintain a continuity of all the stories that have ever come before, but also want to reboot and change things to constantly keep them fresh. They frequently come up with vast cosmic plotlines to explain why things have changed. So, instead of getting stories about Superman Supermanning, we get endless plots that do nothing but explain the latest status quo that last almost until the next big event changes things again. It’s like if Game of Thrones dropped all their plots for a season to explain how CSI: Miami characters came to be in their world, then the next season did a story arc about why the CSI: Miami characters weren’t around anymore. And so on. I might be rambling.

Unfortunately, Superman’s stories these days have no room for even the basic cast of Lois, Jimmy, and Perry, let alone the rich beyond them (whom I hope to cover in future weeks). The only way I can see to improve this is to cut out the characters who already have their own books and, presumably, their own overlooked supporting casts.

*This would, unfortunately, not be so radical as it sounds because I have no interest in any romantic relationship for Superman except that with Lois Lane. It’d be an informed attribute at best. But that’s a topic for another day.