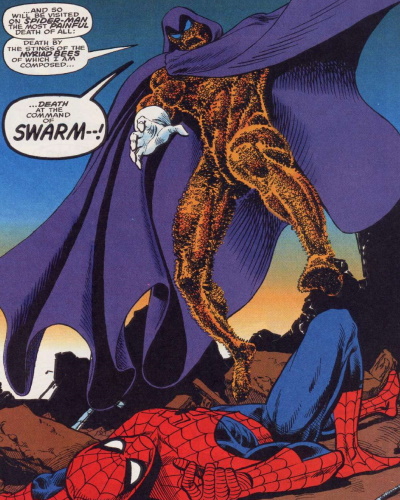 Today’s fictional beekeeper is the Marvel Comics supervillain known as Swarm. If you’ve heard of him at all, you probably know the deal: he’s a Nazi made of bees.

Swarm was once a human scientist and beekeeper named Fritz von Meyer. Fritz’s time during the Second World War has not been explored much, though he’s been described as one of Hitler’s top scientists and we know he was an expert in toxins and poisons. Given that, I’d expect he did some real real bad things. When the Nazis lost, he fled to South America and lived in hiding there for years.

It was in South America that Fritz came to devote more time to melittology, opting to study the breeding patterns of killer bees (perhaps already he saw bees as a way to get his revenge). During this period he discovered a colony of bees that had been strangely mutated by cosmic radiation, making them stronger, more intelligent, more curious, and utterly peaceful and without fear. Fritz saw this and immediately thought “Hey maybe I can make them evil!” so he made a sci-fi ray gun that was supposed to help him control these killer bees and reactivate their violent nature. As soon as he fired on them, the bees devoured Fritz down to the bone, but his consciousness remained alive, now part of the hivemind of the bees. He could even create a physical form for his mind by having the bees swarm around his skeleton. Taking on the role of “Lord of the Killer Bees” Swarm is began his career as a supervillain and began trying to conquer the world.

Indeed this fusion of beekeeper and bees has resulted in one heckuva powerful supervillain. Being a man-made-of-bees, Swarm can fly and break into disparate parts, and looks great in a cloak. They can see simultaneously from the eyes of any and all of the bees in the hivemind, which has at times numbered millions of bees, enough to cover Los Angeles. They can eat their way through various materials, including synthetic webbing and some armours. They have complete access to Fritz’s mad science intellect as well, creating such things as giant invulnerable mutant queens, massive mechanical drones, and duplicates of enemy heroes made from bees. In one instance, after a defeat that left Fritz’s skeleton separated from the bees, a dormant queen was hidden inside his skull that, when bathed in radiation, awakened and gave birth to a new swarm’s worth of bees at incredible speeds. 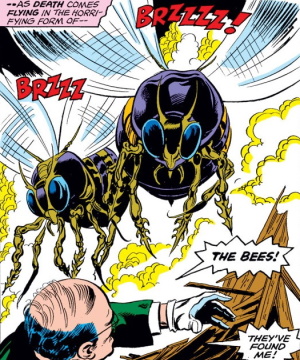 Of course, as impressive as that list is, Swarm is not without weaknesses. Threats to the individual bees are just what they would be to any bees. Fire, water, electricity, all of these and more have felled the bees. Regular insect repellent has proven useful on several occasions. But Swarm itself is not just individual bees, it is the hivemind in full. That’s harder to defeat, but heroes have managed it on numerous occasions. There are vibrations that disrupt the mental cohesion among the bees, but I’m going to come out and say it: Swarm’s biggest weakness is that Swarm is a bad beekeeper.

Swarm’s bees are explicitly “killer bees” and we’ve never once seen the guy making honey. Fritz, and therefore the hivemind, doesn’t care a whit for the wellness of the bees beyond their use as a tool for world conquest. Not once have I seen Swarm, you know, making honey or anything. This whole colony is too caught up in that supervillain life to be good at being bees. It doesn’t have to be this way. Beekeepers are supposed to improve the existence of the hive, but Fritz has not done so.

It’s interesting to look at the arc that Swarm has undergone through their publication history, which I’m sure is unintentional since the character has been thoroughly stickerbooked. When fresh on the scene, Swarm was a powerful world-level threat that took a lot to beat. After several defeats, they started identifying as a pluralized being, no longer explicitly as Fritz von Meyer. This version of Swarm decided to opt out of the supervillain game, content to just wait until humanity offed itself through its various follies. This era of Swarm didn’t seek out fights, but would retaliate if someone accidentally hurt them. But that era didn’t last and Swarm has fallen to more petty supervillainy, and with it the singly-identifying again. He’s now more likely to join a team of supervillains (though at least he’s been the leader of such groups) and pull off crimes like robbing banks. Swarm has identity issues and vacillates between a single being who is a jerk of a supervillain, and a grand hive who hates humanity and responds mercilessly to any threat. Neither is great, and a solid beekeeper would have been able to keep the bees on a more constructive track.

As you ponder this rating, keep in mind that I’ve always given evil Beekeepers a lower rating than good Beekeepers. Swarm rates this highly even though he’s quite bad because he’s powerful and supernatural and does good for bee-theming and all that, but he loses that one point that most beekeepers can get just for beekeeping. It’s a shame.