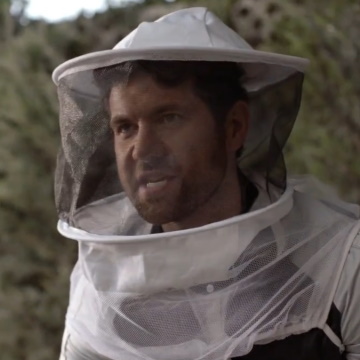 Harrison Wilton is a beekeeper that appears on a television show called American Horror Story. The season in which he appears has the subtitle “Cult” and that is appropriate, because Harrison is a cult member. And it seems to me that what drew Harrison to the cult in the first place was a typical case of Beekeeper Rage. In general he was unhappy with his life and his job and that led to Rage that manifested especially as paranoia. He built up a massive gun collection because he was worried the government was going to take away his rights. When the power went out in the area, he immediately assumed it was a terrorist attack. He’s clearly the kind of guy who worried a lot, and a cult leader came along and was able to take advantage of that. It’s a tragedy.

It’s a shame especially because I think he could have been a good beekeeper otherwise. Like the best beekeepers, he would wax poetic about the inspiring insects: “A hive is the perfect natural community because every single member of the hive is completely committed one hundred percent to a singular task. There’s no arguments. There’s no complaints. There’s no ‘me’. I admire them.” In addition to the beekeeping, he was a personal trainer at a gym, which indicates the kind of healthy lifestyle of a good beekeeper and suggests (along with his gun collection) that he may have actually been decent at Beekeeper Combat. And on occasion he seemed nice. He offered candles to his neighbours during a blackout, for example. Granted that may have been part of the cult’s plot, but I expect he would have been capable of such kindness before the cult as well.

But he never got to be the kind of beekeeper he should have been. The cult lifestyle led to his murder by chainsaw. And while that’s a metal way to go, it’s still not ideal. And that’s the true horror story here, America.