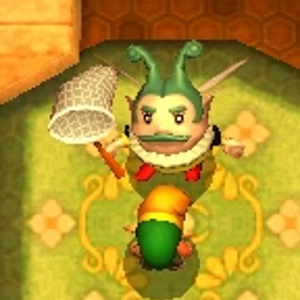 Today we head back into the Zelda franchise for a beekeeper less obscure than the previously reviewed Conly, but only just barely so. The fact that this one is only known as the “Bee Guy” tell you that this is not a prominent character. But Zelda is a game franchise, and the Bee Guy, unlike Conly, actually has been in one of the games.

Appearing in “A Link Between Worlds”, the Bee Guy is a bee-pun spewing fan of bees who, from what we’re shown anyway, seems to focus more on the capture of bees than the keeping of them. There are no hives visible around his home and he claims to have been catching bees for a long time. Indeed he has a lot of nets around for just such a purpose, one of which he gives to Link to help him capture wild bees. So what’s the deal here? Why no hives? I have a theory:

This guy clearly loves bees. So much so that he dresses like one and seems to be putting great financial resources toward his bee collection project. What if the Bee Guy is the first real beekeeper in Hyrule? Or at the very least, he’s learning how to do it without knowledge passed down from previous beekeepers. He may simply not know how to keep bees, rather he’s learning as he goes. For decades, perhaps, he has been capturing wild bees one by one and getting them to like him and work with him, but he hasn’t had a means to actually start a real colony of bees of his own. You see, the rarest of the bees, the ones for which the Bee Guy gives the highest rewards, is the Golden Bee. He says he’s never seen one. When Link does bring him a Golden Bee, the Bee Guy describes it as “a queen of bees”. This could actually be his first time acquiring a queen, and thus the one thing he needs to start a beekeeping operation in earnest. He’s known they exist, but never had one until now.

It’s important to note that when Link gives him a Golden Bee, he gives Link a Bee Badge. When Link wears the Bee Badge, the wild bees of Hyrule will no longer attack him. They’ll actually go out of their way to attack his enemies. It’s clear that the bees recognize the badge as the Bee Guy’s mark, and they respect him enough to respond to it. His decades working with bees one on one have not been in vain. I have a feeling that his beekeeping operation is going to be alright.

Three Honeycombs out of Five. With the disadvantage of not knowing what he’s doing, the Bee Guy has still made impressive strides in the apiary field.