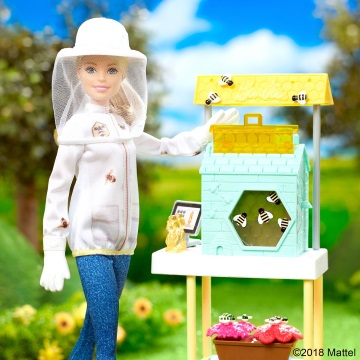 Barbie has been a beekeeper. Of course she has. This should surprise nobody. Barbie is, perhaps, the person to master the most varied collection of skills in the world. She makes Batman look like a slacker. So she’s a beekeeper. But how Beekeeper is she?

Well, one of the great advantages of beekeeping is that it allows time for other pursuits. Beekeepers can climb the world’s highest mountains or make discoveries that will form the science of genetics and still be beekeepers. Beekeepers love to multi-task. But I feel like, if anything, Barbie has stretched herself too thin across her various occupations. I feel like she’s never really sat down and focused on her beekeeping.

So here I hit a fork in the road. Is Barbie a woman who does everything, including beekeeping, or is she a beekeeper who does everything else as well? Sadly, I think it’s the former. It’s a shame, because as far as I’ve been able to suss out, Barbie has no problem with Beekeeper Rage, and the fact she’s served in the military (as evidenced by various other toys) suggests she has combat skills. There’s definitely media out there about Barbie solving mysteries. I’d bet there’s even Barbie tales in which she has supernatural powers. She has everything I want in a beekeeper, but not enough beekeeping.

This has got to be the highest a Beekeeper can rank without actually dedicating their life to it.