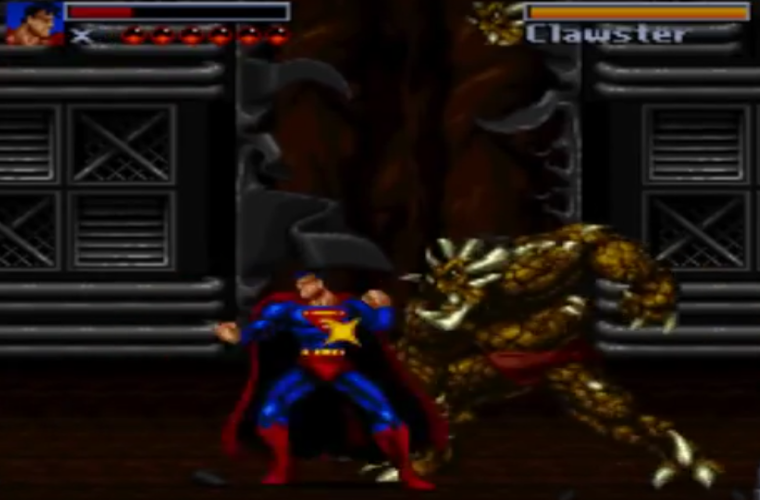 I have recently been seeing bits of this new Spider-Man game that just came out, and thus my jealousy of other non-Superman superheroes is rising up again. I know I already solved the lack of a good Superman game by saying they should be making a game about Jimmy Olsen, but even I am aware how unrealistic that would be.

If a Superman game ever happens, it would star Superman. And they would probably want it to still be like these Spider-Man and Batman games where the hero fights through armies of crooks. That wouldn’t be great for Superman. It is an iconic image of the Superman mythos: he stands before a crook who empties a gun into his chest and Superman just stands there, unharmed. Just because you have a gun, doesn’t mean you win anymore. Superman is in town. To accurately make a Superman game, you would have to replicate that. He would not be a good fit for the style of gameplay that the recent Spider-Man and Batman games have. This should be solved by making combat against supervillains (Metallo, Parasite, Clawster, and so on) a special event and the rest of the time you’d be doing journalism and saving civilians.

But no. It wouldn’t happen that way. If you only get to taste combat during boss fights, you would never get to enjoy it, right? Superman needs hordes of goons that he can beat up on. Today I will provide some examples of baddie hordes one could use:

Aliens seems like the easiest way to. There is a whole army of Kryptonian criminals waiting in the Phantom Zone to fight. But if it were me making this game, I would be saving most of the aliens for the sequel, so I will focus on Earthly threats.

Robots is a good place to start. I would make it a mandatory requirement of this game that the robots from the Mechanical Monsters short show up. That is a must.

My next thought is Toyman. His army of robot toys would provide a lot of variety for baddies. You could have green army men as his main troops. Giant teddy bears as the muscle. He had flying monkeys once on Supergirl, so throw those in. Toyman offers a lot.

A non-robot source of a variety of enemies would be Funnyface. As I explained before, he can animate characters from comics, so he could bring forth any number of sci-fi or fantasy foes worth our fists. (Similarly, Mxyzptlk offers a means to fight any and every thing, of course, but I would rather save him for non-combat stuff.)

If we absolutely need Superman to be punching actual people, we can do that a couple different ways. The main way, the way which Absolutely Will be in a Superman game if they ever make one, is to give mobsters super high-tech weaponry. That’s fine, but a batch of Intergang crooks with fancy guns is not particularly interesting. It’s downright boring. It can be in there, but it has to be the least of Superman’s worries.

Luckily, Superman has a villain called Riot. He has the power to create multiple forms of himself and run amok over the city. That means there could be massive battles against dozens of enemies that are actually one guy. I am actually pretty sure he actually showed up in the Superman Returns game, so lets take that and improve on it.

Another option that occurs to me is criminals who are using Tar. In a storyline during the 90s, I can’t recall if it was in one of Superman’s books or in Steel’s, there was a drug called Tar that would turn its users into superhuman brutes. I like the idea of including them because it could be required to administer an antidote to defeat them, thus changing up the gameplay a little.

Finally, a pretty obvious one: Lex Luthor. He is an obvious opponent for the game (too obvious for me. I would not have him as the big bad.) But he would be a plausible source of robots, and of human opponents. In some stories LexCorp has a security force of guys wearing power armour (Iron Man style). That means enemies who can fly around as a precursor to the Phantom Zone criminals to be fought in the sequel. And after Superman beats them Lex can issue a press release about how those guys were disgruntled employees using stolen equipment and so on.

Well, I think I have proven that you can have a variety of goon hordes in a Superman game. I suspect that next week’s post will also be about a hypothetical Superman game.