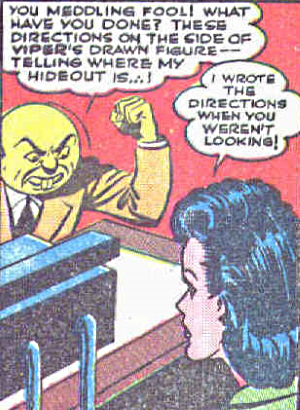 There’s been a lot of confusing decisions made in the publishing history of Superman. At some point during the era we now call the “Silver Age” of comics, it was decided that the stories that occurred in the “Golden Age” no longer applied to the “real” history of Superman. But rather than say they never happened at all, it was decided they happened to the alternate universe Superman of Earth-2. Flashforward a couple more decades and they decided that the Silver Age stuff was getting too cumbersome as well, and that included not only the Silver Age “Earth-1” Superman, but the Earth-2 stuff as well. They did a big reality-rewrite called the Crisis that changed everything around and set things up the way they wanted them now. Similar events have happened since and it’s all needlessly complicated.

One of the ways that this screwed over Superman is that it took away a lot of his Golden Age villains. I’m going to use today’s Superman Thought Victim, a villain called Funnyface, as an example. Funnyface was a villain who opposed the Golden Age Superman. All the way back in Superman #19 he appeared. When the Earth-1/Earth-2 split occurred, he was shunted to Earth-2. Fair enough. He was pretty much forgotten, so it didn’t matter too much. But then, in the late 70s, they decided to start telling new stories about the Earth-2 Superman! Neat, I’m in! (is what I would have said if I’d been reading/born). Occasionally these stories would bring back Golden Age villains, and indeed Funnyface got a comeback story in the early 80s. Funnyface returned, and so did the potential for more returns. But then the Crisis happened. Suddenly the Golden Age didn’t have a home. But Funnyface did return after that. In their new cosmology, DC decided that there had been a team in the 1940s who fought crime (the Justice Society, I believe it was) and then they did a story about that team fighting Funnyface. It was actually a complete retelling of his first appearance with Superman and Lois’s roles filled by a whole team of superheroes*. Somehow, because of all the ridiculous alternate Earth juggling, Funnyface had ceased to be a Superman villain and had become a Golden Age villain. That’s not fair! Make those guys fight their own darn villains! (A more prominent Superman villain, the Ultra-Humanite, went down this same path and that’s much worse, but I will get to that in the future.)

Anyway, to cap that Dumb History lesson, I just want to say that Funnyface ought to make a comeback. Here’s his deal: He’s a frustrated artist, who was probably not very good and was definitely not successful. He developed a way to make characters from comic strips come to life, though he couldn’t get it to work on his own drawings. He used it to summon a bunch of villains from the funny pages and have them do crimes for him. In his second appearance, he used an artists sketch of another villain to make that villain work for him (and that villain had actually been Superman in disguise, so basically Superman had to fight a duplicate of his fake identity). Funnyface, therefore, is a minor variation on Mxyzptlk-style reality warping. In fact, given the chance, I’d tie Funnyface’s powers to the Fifth Dimension**.

But that’s basically why I think he’d be useful. He can provide the wackiness of a Mxy story, with some twists. There are tighter parameters for what he can do, he isn’t omnipotent like Mxy, but we also aren’t tied to a specific ending the way we are with a Mxy story. And it keeps Mxy appearance from becoming less special, and allows for a more vindictive villain than Mxy ought to be.

A handful of Funnyface ideas that someone could steal from me if they wanted:

Anyway, that’s enough for this week. Get on this, DCEU.

*It is valid to say that those two are worth a whole team of heroes.

**It occurs to me I haven’t explained what the Fifth Dimension and Mxyzptlk are yet in any of these posts. If someone were following this and didn’t already know Superman stuff, they’d be so confused. Good thing I’ve no readers.