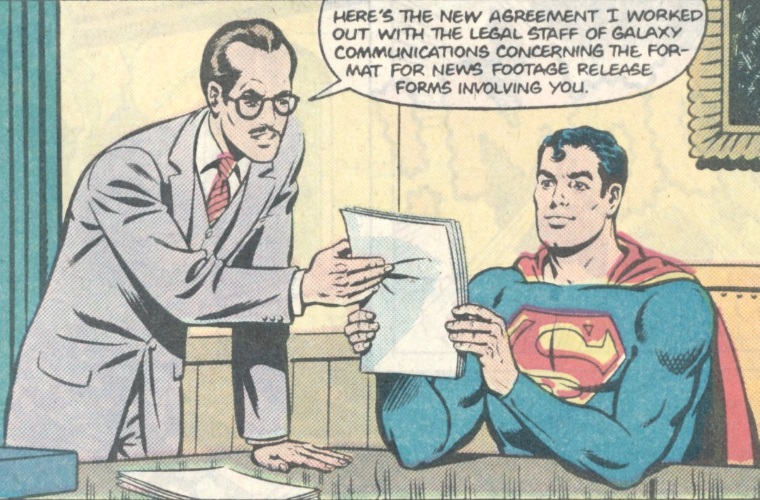 I’m not going to pretend that Douglas Giddings is an important part of the Superman Mythos and that his not being in the supporting cast is hurting things and he must be brought back, but I think he’s a neat idea and I could probably get a quick Superman Thoughts thing out of him.

Giddings made only one appearance, in the pre-Crisis era when it felt like the books were trying to use up their spare ideas before the 80s reboot of Superman. A backup story in Action Comics #581 gives us a day in the life of Superman’s lawyer. Like Jimmy Olsen, Giddings has been given a special watch by Superman. While Jimmy’s watch allows the kid to get in touch with Superman, Giddings’s watch tells him when Superman is coming to meet about legal matters. They talk about things like television stations using the rights to Superman’s image, to advertisers trying to mooch off his reputation. Then crimes happen and Superman races away to save the day, with Giddings riding his motorcycle there to capture footage of the events. The story implies that Giddings has been working behind the scenes with Superman for a long time, even if we never heard about it and never will again.

I like the idea that, when Clark made the move from vigilante to respectable superhero, he lawyered up to keep everything above board. Maybe there’s some story in which Superman saved Giddings, who then volunteered to help the hero out. We’ll never know, but I think there’s some ground that could be covered there, if someone ever wanted to.

(Fact: Nobody but me wants to.)