I admit that, even though I want Superman to be about more than just confrontations with supervillains, I’m jealous of the superhero franchises with better rogues galleries. 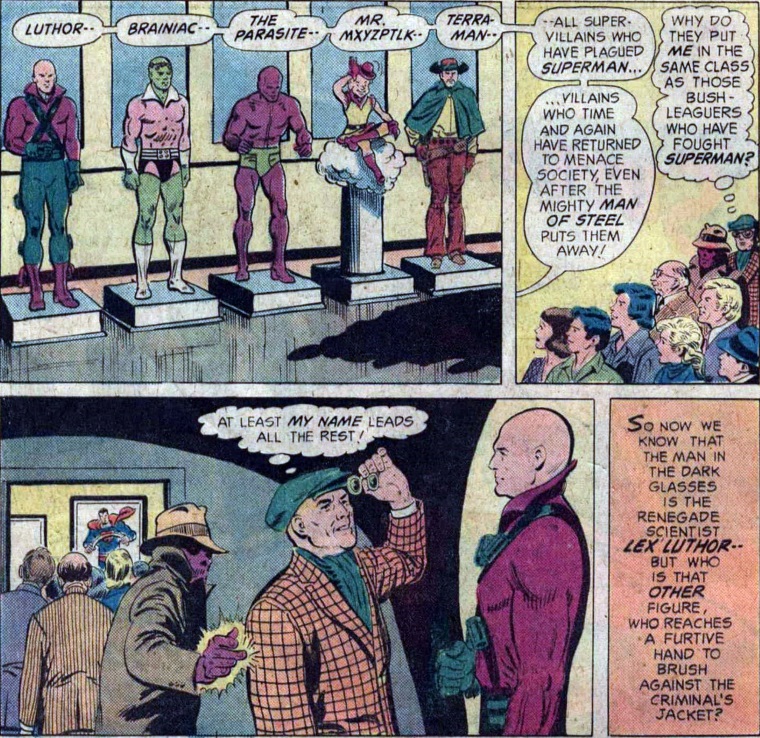 Sure, Superman’s got some big name villains. Lex Luthor is pretty much known to even the common folk as an classic example of an arch-nemesis. Brainiac has had an impact on the culture at large, though I’m confident that not everyone who calls someone a “brainiac” realizes they’re invoking a Superman villain (and a similar situation exists with Bizarro, if we’re counting him as a villain). General Zod probably just juts into the public consciousness, coming second only to Luthor for villains in the Superman movies. Any Superman villains beyond that point, I’d say, are not known to the public. That’s not to say that there aren’t some more good ones, just that Average Joe Aversageson will not be familiar with them.

When I look at other heroes, especially Batman and Spider-Man, I see casts of villains that are much more esteemed. And I’m jealous. Superman deserves that.

Why does Batman have better villains than Superman? I credit one specific reason: The 60s Batman show with Adam West. Even if there was a reaction against the campiness of that show, it managed to bring an awful lot of Batman’s villains into the public consciousness, which cycled back into the comics by making writers explore those famous villains and really flesh them out. Compare that with the 50s Adventures of Superman show, which brought none of Superman’s villains to the screen. 90% of the antagonists on that show were generic mobsters and got no characterization at all that would make them memorable. There were no repeating villains either. Even when they’d reuse an actor to play a villain, they’d be playing some new generic mobster, instead of the one they’d played before. This show, which had many things I enjoyed, and which ran in syndication for an eternity, did zero work towards introducing Superman’s villains to the world. And that is why Superman’s villains aren’t up to snuff today. I have spoken.

And so, in addition to discussing Superman’s supporting cast, I will be taking frequent looks at his villains and discussing how to make them work. One simple rule is that I will only work with existing villains. I don’t think creating new Superman villains is necessary, and it only further dilutes the existing ones, especially when writers make the mistake of trying to inflate the importance of the new villains. That’s a thing that, even to this very day, is still working against my goals.

Anyway, tune in next week for discussion of a villain, same Pat-Time, same Pat-Website.