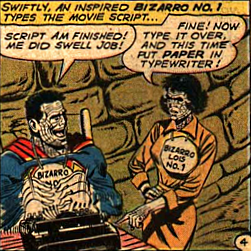 One of the things I want from Superman stories, and superhero stuff in general, is for them to not always be about beating up the bad guys. Honestly, that can happen. You can use superheroes for interesting sci-fi premises that are about ideas other than violence and villainy. The Silver Age Superman books for were great for that stuff. We can have that again. We need to have that again.

I’m not just saying that we need stories where the heroes resort to non-violent means to bring down the villains. We do need that, of course, Lois and Clark should be bringing down as many criminals with their writing as they do with their punches. But also, I want stories that aren’t about villains who need to be stopped by violence or otherwise. I know we all like to blame people, but sometimes bad things happen that aren’t directly caused by people who we then need to punish.

I think that comics writers hear that kind of thing and assume that with no villain, there is no conflict, but there’s a lot to learn from watching things like the Twilight Zone or better episodes of Star Trek. Superhero comics, I think, would do well to move into that kind of conceptual space, instead of everything being a punching contest. I don’t know that I have more to say on the topic than that.

Anyway. With that said, I will now proceed to make myself look like a hypocrite by spending a lot of time in future weeks talking about how we can improve the villains in Superman comics. Oh well.