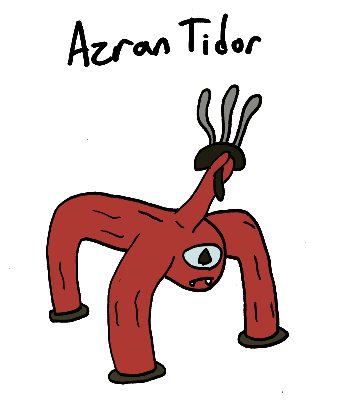 The Durlizkens are a slow-moving, three-legged species with one large eye and an appendage growing from their forehead. They communicate by stomping out codes with their hooves, the vibrations of which can be detected by the sensitive feet of others. This is as close as they come to possessing a sense of hearing, and there is no way to determine a Durlizken’s “voice” from their vibrations, only their vocabulary is useful way to differentiate who is speaking. First contact has been made with alien lifeforms, so the Durlizkens know they are not alone in the universe, but there has been little trade of ideas or goods with the aliens. On the aliens’ part, the Durlizkens don’t have much to offer. On a galactic level, the Durlizken homeworld is just considered a primitive backwater world, though it is an alien word “Durlizken” that we are using to describe the species, since the species doesn’t have any such word to describe itself, just a vibration code. 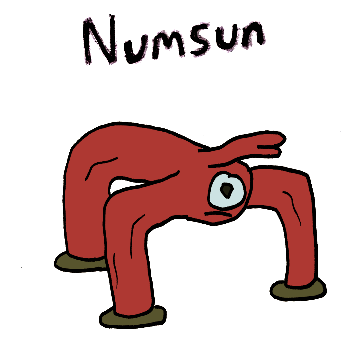 Azran Tidor is a slave-driver. Slavery is a thriving industry among the Durlizken homeworld, with the slaves being anyone who has broken a law. The problem is that the industry is so profitable that the wealthiest Durlizkens can’t get enough slaves, so it is no longer just the most severe of criminals who are enslaved, but any violator of any minor crime. Azran Tidor is particularly malevolent, manipulating events to create more potential slaves by causing the conditions in poor regions to get worse until the denizens have little choice but to turn to crime.

Numsun is a religious figure who has spent a large portion of his life studying the Potent Questions, which the Durlizken consider the hardest things to answer about life. He hasn’t got any answers yet. 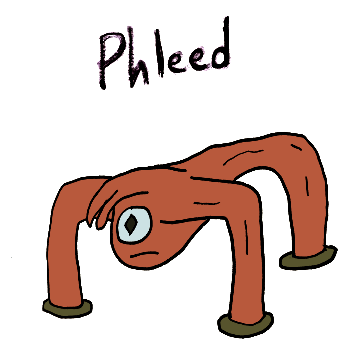 Phleed is a young Durlizken who is trying to start a pack family of his own. Having recently left the one he was raised in, Phleed is now wandering the wilderness looking for other youngsters who want to ally with him.

A Fact About Durlizkens: Durlizkens have no sense of smell, in addition to no sense of hearing, but their eyesight detects a range of light well beyond human limits. They also have a humidity sensing organ that doesn’t really compare to anything humans have, but which helps them predict weather changes.