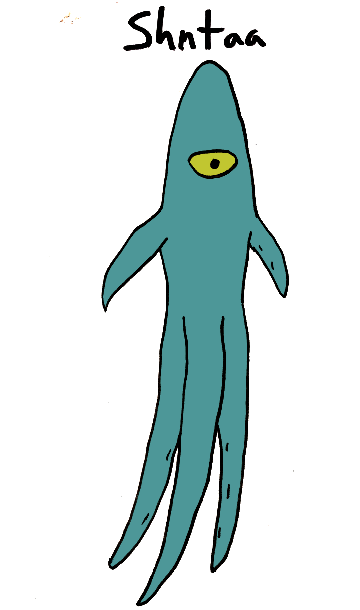 The Aado Vvuk are an aquatic species that evolved in the oceans of a world they call Mnaara. The Aado Vvuk have five tentacles, two functioning as we would call arms and the rest, though still functional, are more rigid and are used primarily for motion. They have one eye, which they can bulge out to improve their peripheral vision, and their stomachs can be extruded from their body (from around the “armpit” region) to engulf food.

Aado Vvuk culture is highly ritualistic and the vast majority of them have daily routines that they prefer not to vary from if at all possible. Acts such as eating are personal, so the length of the involved rituals can vary from person to person, but more public acts, especially those involving the election of government, are more consistent. Almost all rituals involve a stupid amount of chanting, though. 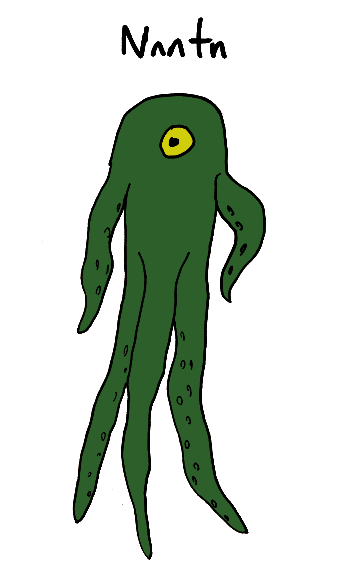 Shntaa is on a quest to circumnavigate the oceans of Mnaara in the hopes of gathering together the pieces of an ancient artifact that have been spread all over the world. The Tubes of Aaanaaav are spoken of in stories in various Aado Vvuk cultures, supposedly a device that could generate power unlike anything seen to this day. Shntaa’s research has determined that the Tubes were broken during a conflict between two communities and the pieces were spread as symbols of friendship to the leaders of various other communities and so it has been down the centuries. Shntaa dreams of tracking down and reassembling the Tubes and being a rich energy provider. Unfortunately for Shntaa, the Tubes actually created only small amounts of energy that, while impressive back in the day, have been greatly exaggerated by legend and actually pale in comparison to modern technology. Hopefully, when Shntaa learns that, the archeological victory will be comfort enough.

Nnntn is a butcher, an occupation very similar on Mnaara to its equivalent on Earth. The fish-like livestock of the Aado Vvuk are given to Nnntn, who then chop them into the good bits and gives them to consumers. It is good, honest work and Nnntn finds it rewarding, if unfortunately messy. Cleaning up after a bloody mess is harder underwater than in the air. 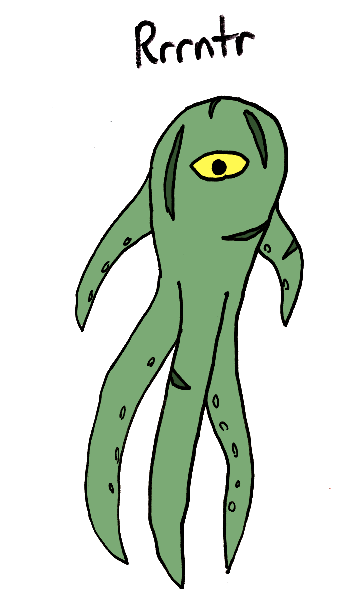 The badly scarred Rrrntr is a veteran of the most popular “sport” on Mnaara. The sport involves a performer standing before a crowd and committing various acts of self harm. Generally, when it comes time to retire, these self-harming athletes will perform a final exhibition in which they damage their eye and live the rest of their life being supported by their fans. Rrrntr was fairly successful, gaining a fan following that still respects the aging athlete to this day, but the idea of being blind has no appeal. It may result in a lost of respect from the fanbase, but Rrrntr would rather be able to see.

A Fact About Aado Vvuk: Since they live beneath the surface of their oceans, the Aado Vvuk do not study celestial bodies by the light that reaches their world (though they know of their sun, at least), but they have begun to get a sense of their stellar system by close study of the effects the moons have on the tides. They are developing a great understanding of gravity.