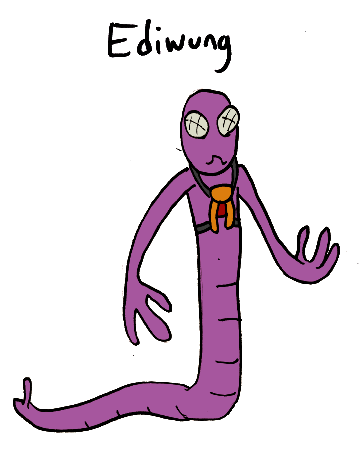 The Arrphays are a species of people with serpentine bodies and two limbs each with three digits. Arrphays are native to a world called Treinaf, which is a moon that orbits a gas giant planet, and is tidally locked so that one side of the world is always facing the planet.

Arrphay society is very territorial, with individuals building nests at the top of the planet’s treelike growths, and don’t let anyone else near it. This isn’t done with animosity, it is the norm for these people, but violence results if the social mores of solitude are broken. During the appropriate times of the day when Arrphays meet for various reasons (feeding, mating, planning, etc.), the gatherings are done in shelters built on the ground, away from any occupied trees.

The Wallfixer named Zerbdoffer is a member of this species, though he has not spent any time on the planet since his Wallfixer powers manifested and he left to be trained. 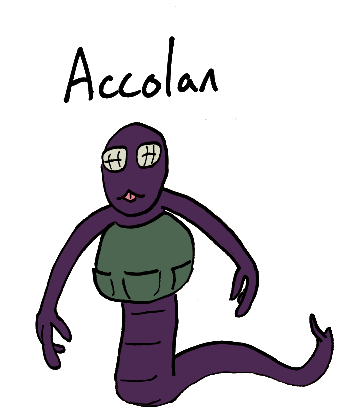 Ediwung is an artist, who sets up large decorative objects (painted stones, shiny streamers, that sort of thing) around the ground shelters. The resulting decorations are nice, but the actual installation of the pieces, the construction, is a performance and that is what the Arrphays to consider to be the “art”.

Accolan is constantly nervous about wars breaking out. There have been wars on Treinaf before, though never on the kind of scale we on Earth know, but Accolan saw some of the worst of it, and is now certain it will happen again. Every slightest sign of turmoil, every hint of anger between two Arrphays causes Accolan to exclaim with certainty that the war is beginning! Everyone who lives near Accolan is getting pretty sick of it. 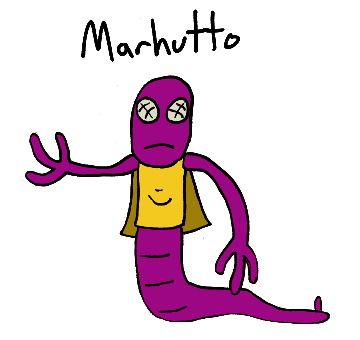 Marhutto lives in one of the tallest trees on the world. That is not generally a concern when building a nest, much more important is distance from other trees, but Marhutto is very proud of the height. The view from Marhutto’s nest is stunning. Marhutto often spends hours sitting and looking out over the planet and singing softly.

A Fact About Arrphays: Arrphays have no teeth, but their tongues and the roofs of their mouths are rough like sandpaper. They “chew” their food by rubbing it around in their mouths.