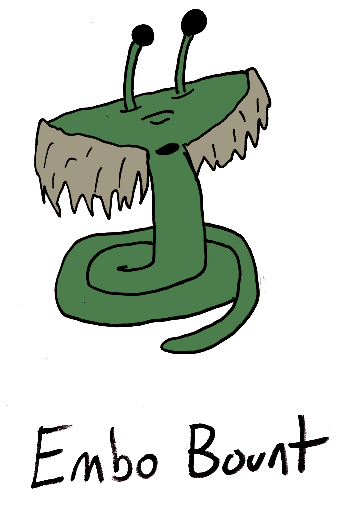 Srimuns are native to the planet Throil orbiting a red star called Sudge. Their bodies are probably best described as being T-shaped snakes. On their head they have a sort of beard, which conceals small pincers they can use to hold things (though coiling tails around things is also used for less delicate work). Srimuns have two eyes, which are on retractable stalks, as well as two mouths, one for breathing and speaking and another for eating.

Over the course of nine-thousand years the Srimuns rose from simple hunters to develop cities and spread to all the other habitable valleys on their world. They developed submarines to travel their depths and computers to store their information and communicate. Wars were fought and, though they never split the atom, they developed many powerful weapons. Srimun society rose to some pretty nice heights, but then went into a decline. Srimuns had become too dependent on their technology. They no longer farmed, hunted or built things on their own. Cities were falling into disrepair and young Srimuns were not being trained in the necessary skills to maintain the technology. It was at this point that the Ugder first arrived on the planet. Had they arrived only a few generations later, they may have found only the remains of the Srimun. 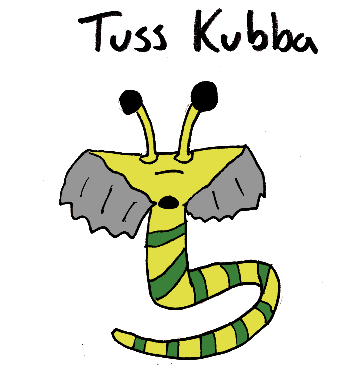 First contact with the Ugder went extremely well, the language barrier being the biggest challenge. Embo Bount was one of the first Srimuns to meet the Ugder, the closest thing to an linguist on the planet in their days of decline. For whatever cultural reason, Embo and the others had no innate fear of the alien outsiders, so the efforts to learn to communicate with these strange beings went very calmly in face to face meetings. In time, the Srimuns learned to approximate Ugder speech (though the Ugder are unable to reproduce the sounds of Srimun languages) and the two species have been at peace ever since. Embo has gone on to visit the Ugder homeworld as an ambassador on many occasions. 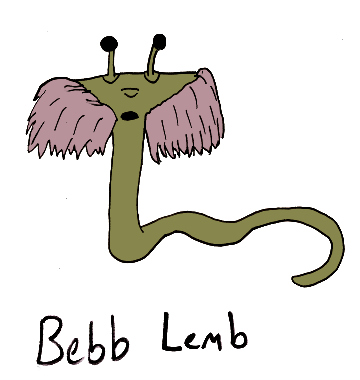 With the arrival of the Ugder, knowledge in things like science and technology came back into vogue on Throil. Tuss Kubba, once a youngster who was content to wile away the days playing games, has now become devoted to researching the old sciences to learn the ways of the high-tech ancestors.

After being taught the ways of space travel by the Ugder, the Srimuns colonized the planet Nush, which is another world in their system. Bebb Lemb is one of the colonists there. Because Nush is much further from the sun than their homeworld, the Nush Srimuns live in heated and artificially illuminated tunnels below the surface. Bebb runs the colony’s machinery for converting surface ice into potable water.

A Fact About Srimuns: Srimans have domesticated a species of animal that somewhat resembles a flightless bird. These creatures are used both as pets, and also as steeds, which the Srimuns ride by coiling themselves around the beast’s torso.