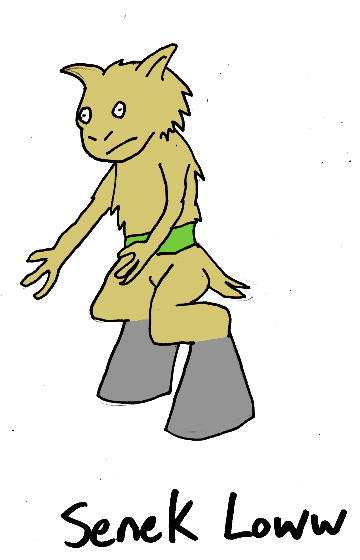 The Bosonobes live on the planet Zips. They are a furry bipedal species with massive hoof-like feet that evolved from a herd animal that lived in the planet’s marshy lowlands. The species is even more obsessed with mating rituals than humans are, and it colors most aspects of their society. A physically attractive specimen of the Bosonobe equivalent of a male is will display large horns and a large club tail, while female-equivalent Bosonobes show off long and shiny fur.

Senek Loww is a Bosonobe lawmaker, which is a hereditary position passed down family lines to those who have produced an adequate number of children (the exact number varies among different Bosonobe cultures). Senek inherited the job after her third child was born. Senek has been a champion of laws that prevent the childless from having a say in society. After all, if they don’t have children, why do their opinions matter? 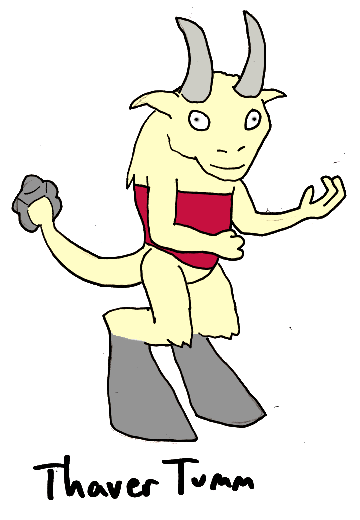 Thaver Tumm is a manual laborer in the big city. He has no real attachment to his job, he just considers it a halfway decent way to make a living. Like most Bosonobes, most of Thaver’s energy is spent on attempting to mate. He spends all his free time at the watering hole trying to impress potential mates. Though Bosonobe society has become too advanced to actually condone fighting rivals, there is still a lot of posturing involved, mostly showing off one’s club tail by shattering trees and ice sculptures and so on. If Thaver has ever had any doubts about this being the best way to spend his free time, he certainly hasn’t thought too deeply about them, and his society absolutely reinforces the message that this is what Bosonobes are born to do. That said, Thaver has not been especially successful and has begun setting aside a significant part of his stipend to save up for prosthetic horns that would slip over his real ones to make them appear massive. 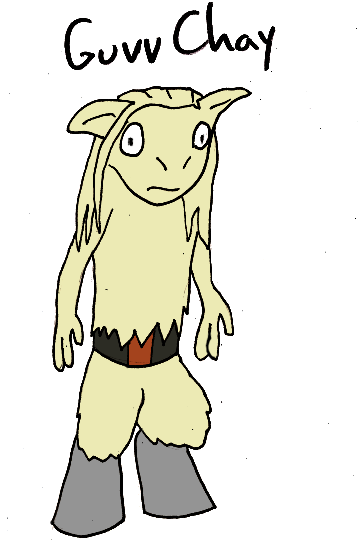 Guvv Chay is considered a particularly Bosonobe, so life is good for her so far. She is frequently courted, but has yet to conceive a child. Guvv doesn’t know it yet, but she is incapable of having children, and this coupled with her good looks makes her an example of one of the most reviled groups on the planet: the Mate-Ruiners. Even through it is through no fault of her own that she cannot reproduce, Bosonobe culture treats Mate-Ruiners as if they were purposely trying to sabotage the species. In a few years Guvv’s lack of offspring will be seen as suspicious, and after that she will be reviled.

A Fact About Bosonobes: Although over sixty percent of the planet’s surface is covered in water, the Bosonobes have not yet developed any kind of technology for travelling on it such as boats. The closest they’ve come is making small rafts for carrying things through marshy areas, but even then the Bosonobes generally wade through the water while pulling the raft behind.