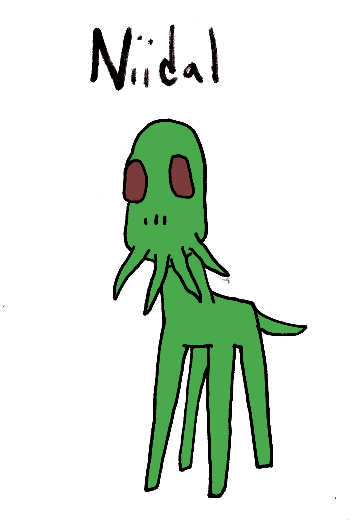 The Vyvtyx of the planet Dwennuar are a quadrupedal species with face tendrils. Though they are as adept with their tendrils as any human is with their hands, the Vyvtyx have yet to create tools in the same sense that humans have. They do, however, have methods of using the other animals and plant-life of their world to the ends they need.

Niidal is a reclusive loner living in one of the least populous sections of Dwennuar. Niidal just got sick of all the complications of ordinary Vyvtyx life, like the mandatory social service, the morning chanting, and the swebzy fuangnag. Who can keep up with modern life? Not Niidal, that’s for sure. So he’s living off the grid, in some cave where he doesn’t have to see any Vyvtyx and doesn’t need to meet with their standards. It can be lonely and hard to live a life along, but at least he doesn’t need to put up with swebzy fuangnag. 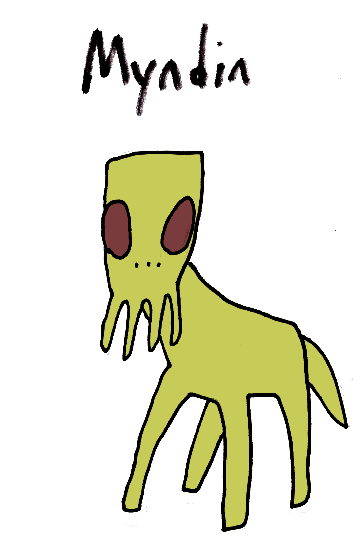 One of the most popular technologies of the Vyvtyx is the use of symbiotic lifeforms. For example, they are known to ingest one species, similar to Earth’s tapeworms, that will live in their insides, but will provide some benefits to the host. Myndin is a breeder of such worm creatures, his particular livestock being used by Vyvtyx who suffer from allergies. Myndin’s worms alleviate their symptoms for as long as they are present in the host body, so Myndin’s particularly clever addition to his livestock is a “planned obsolescence” created by breeding them to lower their lifespans. Though Vyvtyx have no currency as we do, they do operate on a barter system, so when allergy sufferers need to replace their worms, they have to give more goods to Myndin. If Mindyn plays this right, he could amass a fortune of wealth in a way no Vyvtyx has before. If the customers catch on that he’s actually making his product less efficient on purpose, he may have to face their wrath. 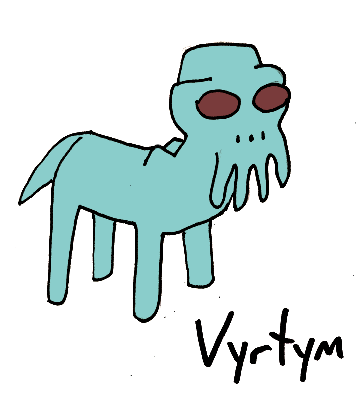 A popular form of entertainment on Dwennuar is to watch races in which a group of Vyvtyx will pursue an animal and the first to catch it and get it back to the starting line declared the winner. Vyrtym is a professional racer, and is quite successful. Though the modern Vyvtyx may not be as built for speed as their evolutionary ancestors, who hunted for food, the event still thrills them on an instinctual level. Unlike Earthly races, contestants here are encouraged to sabotage their opponents, so long as no serious injuries are incurred.

A Fact About Vyvtyx: When a Vyvtyx gets old, they are seen as being a burden on the rest of the species. There are different methods throughout the species various cultures, but among all of them the elders are ceremoniously killed. If a Vyvtyx doesn’t want to die, it can get very unpleasant.