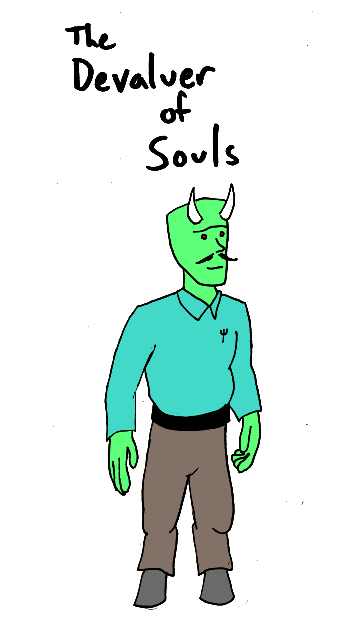 The Devaluer of Souls

Most devils are into getting souls, everyone knows that. But a lot of humans don’t want to sell their souls. They consider them pretty valuable or whatever. That’s where the Devaluer of Souls comes in. It’s his job to drive down the value that people have for their souls. There’s a lot of ways that can be done. In the past, he’s tried to start philosophical movements that encourage people to think of human life as a worthless, meaningless affair, so why not sell your soul? He’s obfuscated the idea of eternity in people’s minds, so that they won’t understand or appreciate the commitment that selling ones soul really signifies. But suppose some enterprising devil wants the soul of some particular person. That’s when the Devaluer is sent in to do his best work. He will haunt his target, insulting and terrifying them until they think their lives are things from which to escape. When he does his work, people can’t sell their souls fast enough.

But if he’s not the one buying the souls, what does the Devaluer get out of the deal? Why would he do this for all the other devils? He may not get souls, but they pay him in the next best thing: Cash Money! The Devaluer likes to spend his free time lounging in vacation resorts on Earth, and he needs money to keep relaxing in style. 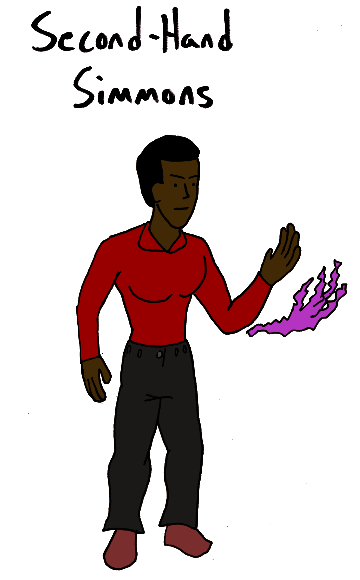 Don’t point out that it’s actually a third hand. She’s heard it before and she is getting annoyed with it.

Corrine Simmons has a strange hand-like energy construct that she can control with the skill and dexterity as though it were her natural limb. This secondary right hand, which appeared for no reason known to Simmons (but which may involve certain Space Gods), can stretch to a length of dozens of feet and can lift a car with ease. Unfortunately, Simmons has decided to use this gift for crime. When you can pick up ATMs and carry them away, who is going to stop you? Well, Natalie Archibald‘s police task force, that’s who.

It wasn’t intentional when I started that the vast majority of human characters in the Valia/Space Gods portion of my character creation would be black, but I’m gonna roll with it. If a lot of white characters had accumulated together in a superhero story, barely anyone would notice. In an ideal world, that could happen with a black cast too.