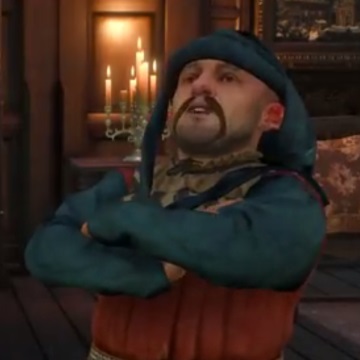 Holofernus Meiersdorf is a halfling beekeeper who lives in the fantasy land in which the Witcher franchise takes place. Previous reviews of Beekeepers in fantasy worlds have provided us glimpses of some very powerful beekeepers. Sadly, Ol’ Holofernus is not another one like that.

Holofernus, with his sons Bernie, Franklin, and Hugo, runs a honey farm called Honeyfill Meadworks. They seem to do a good job of it, so I’m not going to impugn their skills as apiarists. But what they don’t have is that extra something that makes truly special beekeepers. When they think their farm is under attack by a ghost, what do they do about it? They hire the Witcher to solve their problem for them.

These guys live in a world where magic and stuff is all real, but instead of using magic to become Ultimate Level Beekeepers, they’re just ordinary halfling guys who are actually worried about the threat that ghosts could pose. Power to them for being good at beekeeping, but it’s just a shame that they don’t apply themselves and unleash their full potential.