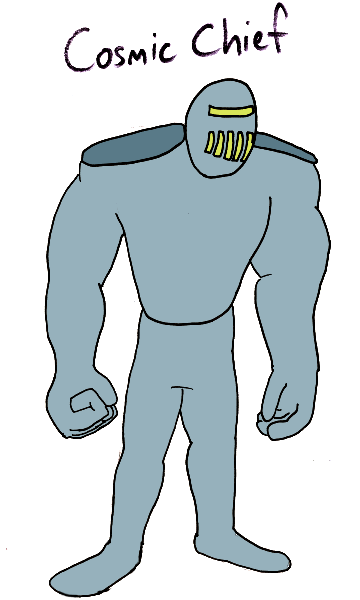 Hundreds of years ago, a strange otherworldly energy burst into a small village from some other dimension. A handful of people were exposed, and were mutated into cosmically powerful new forms. One of those individuals was particularly cruel and fought among the others, but was eventually driven away to outer space. There, he became known as the Cosmic Chief, making an alien army, and after a century finally returned to Earth to find it populated by all manner of superheroes and villains. He immediately resumed fighting.

This one is another design and story from when I was a kid. The idea was that the strange energy was the source of most of the powers in that universe (what I now call Universe Orange). After that original group was exposed, their powers spread. Anyone present when one of these beings was killed would gain be exposed to their energies, gaining some diluted form of their own powers. And any offspring of those people would inherit them. Furthermore, in the stories I plotted back then, the Cosmic Chief was killed and one of his hands, referred to as the Cosmic Fist, was detached and could be worn by others, giving them great power. Pretty much an Infinity Gauntlet ripoff, if on a lesser scale. Plus, it’s an actual guy’s fist. 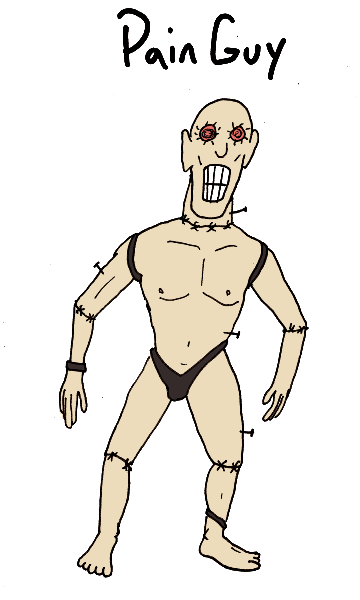 Like the Wine Taster, the Pain Guy is an Unsettling Oddity, which means it is his goal to just freak people out. While the Wine Taster preys on social situational anxiety, the Pain Guy takes a decidedly more visceral tack. Imagine being alone on a dark street, when a scantily clad man runs around a corner, sprints straight toward you, and starts hurting himself. He throws himself on the ground or against walls, drives nails into his flesh, or even stabs himself with a knife. His screams and moans are terrible, when he isn’t actively damaging his own voicebox. After a few moments of this, that would surely feel much longer, he would crawl or limp away.

I bet you’d find that pretty freaky and confusing, wouldn’t you? Well then you’re just the kind of sap the Pain Guy wants to visit.

For the record, that’s supposed to be barbed wire wrapped around Pain Guy’s limbs, not Frankenstein stitching.