I’m not going to lie: this week I’m using some sketches that sat around for some time because I had no idea what to do with them. 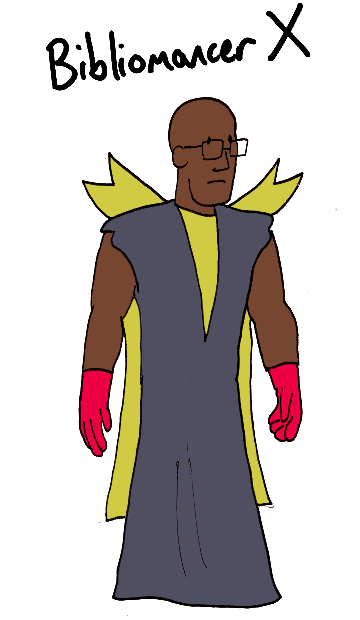 Anyone can read a lot of books, but Bibiliomancer X’s goal is to read all books ever. Using his wizardly powers to aid this quest, he doesn’t need to sleep, retains all information he takes in, and he reads at speeds that would make machines stagger. He can also project his mind on to the Internet to soar the information superhighway for whatever information he might come across. With this knowledge, he finds patterns and trends that bring him closer to enlightenment and allow him to nearly predict the future.

But with so much of his magical energies devoted to such scholarly tasks, Bibliomancer X is not especially skilled in offense or defense. His library base, on the top floor of a skyscraper, is constantly at risk of attack from his enemies or those who want to steal his valuable books or magical trinkets. This is why Bibliomancer X is one of the most loyal clients of the security agency that employes Securitaur. 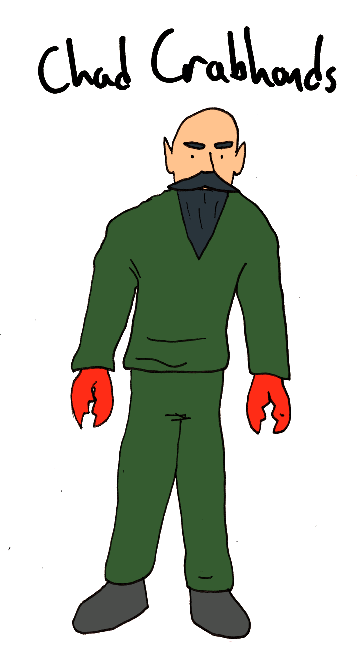 Chad Crabhands is your classic bad attitude case. He’s the type of guy who gets pissed off at people and acts childishly in return, then gets more pissed off because everyone is pissed at him. It’s pretty tiring for people who know Chad Crabhands.

Chad works the night shift at a call centre. It’s the only job he’s held down for more than a couple years, so at this point it seems like it’ll be the place he remains as long as he can. He’s got a one-bedroom apartment in a pretty crummy building downtown. He spends a lot of his free time drinking and gambling. He’s got a jeep that he bought used, but it runs pretty well. He intends to take it out of the city for a trip through the woods, but never really finds the time. His parents are both dead. He was an only child. His favorite type of cereal stopped being made a few years ago. He has a recurring dream in which he’s lost in a city he’s never been to, in Europe he thinks, and he can’t find a phone.

Oh! Also, he has crab hands as a result of a curse an old lady put on him when he was a kid. That too.