Here’s the thing: At the rate of only putting out one superhero a week, I’m getting buried under my sketches. In an effort to keep up with myself, I’m going to start doing two a week. Here we go:

When a minotaur finds himself mysteriously transported form his mystical home realm to New York City, what does he do? How does he go about his life in a world so unfamiliar? Like anybody else, if a minotaur wants to fit into society, a minotaur needs to get a job.

Suppose you live in a world where crazy supervillains, colorful crimelords, overt ninjas, and evil aliens all abound. Sure, superheroes do their part to preserve the status quo, but suppose you own a bank or a company or something, and you think you’re likely to be robbed or attacked by superhuman criminals. The regular superheroes will show up when the fighting starts, but if you want to create some preventative measures, you need to hire a security guard. A security guard like Securitaur.

If I got to do a comic about Securitaur, it would be all about crazy absurd fights and set pieces. Also, Securitaur would be the face of his security company, but would have a squad of teammates, and would have to answer to a cranky boss and shareholders. It would be an action-packed sitcom starring a man-bull, and I am honestly surprised that isn’t the dominant genre on television. 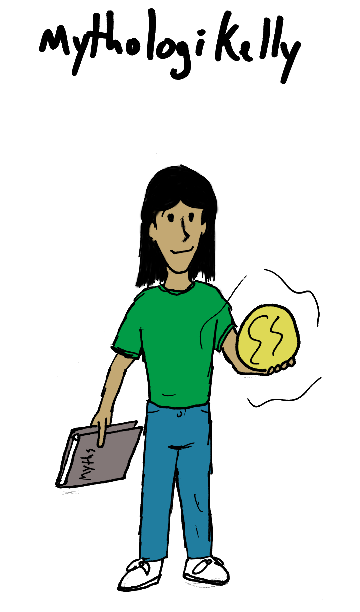 When nine-year-old Kelly Doukas and her family moved to a new town, she discovered a ball in the basement of the new house. Later, while reading a book about heroes of Greco-Roman myth she’d got from her grandparents, the ball started to glow. When Kelly touched it she found herself transformed into Hercules himself! At least physically she was Hercules, mentally she was still Kelly.

Though Kelly doesn’t know it, she’s discovered the Eidolon Sphere. This magical device allows her to occupy the idea-form of whatever Greek of Roman hero she is focusing on. Kelly can transform to any of the mortal heroes, Odysseus, Achilles, et cetera (even a couple of actual women like Atalanta and Camilla), but none of the gods. The catch is that Kelly can’t just repeatedly be the same hero, and the strength of an idea-form is dependent on the hero’s kleos, or how well they are known in the world. So while Hercules and Odysseus would still be pretty renowned, other heroes, like Iarbus (who doesn’t even seem to have a Wikipedia page), would be less useful.

I was going for a sort of Saturday morning cartoon here, based entirely on Ben-Ten, a show I have heard about, but never seen. I know it’s about a kid who can turn to a variety of (ten?) aliens. Also, there’s a bit of Captain Marvel in here, with the idea of a young person turning into a full-grown hero (especially given the connections to mythology). For the sake of ease, I’d keep the Greek and Roman myths together, because they’re certainly close enough, but at some point, probably, Kelly would have to encounter someone who can transform into the heroes of some other mythologies (Sumerian, Norse, Egyptian, Aztec, anything with enough mortal heroes, really).