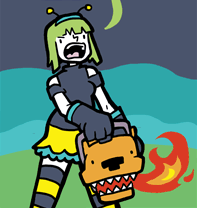 Trigona Ambrose is a character in a webcomic called Beeserker. It’s a very surreal sort of strip wherein some Sciencemen decide to create a robot powered by bees. Such a quest requires a lot of bees, and Trigona is the beekeeper who supplies them. So now that robot, the titular Beeserker, considers Trigona its mother figure and she’s got some bizarre friends to drag her into bizarre adventures. Most of the beekeepers I’ve reviewed so far have appeared once or twice and then their story was done, but Trigona is still appearing in an ongoing comic, so she’s still “active” if you will. 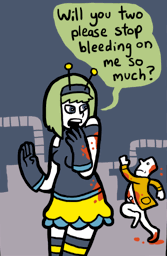 Called “Beegirl” by the Sciencemen, in many instances Trigona comes across as a voice of reason in the strip. But that is only because of how insane everyone and everything else is there. Trigona’s role as a bee-seller is, she admits, not typical of a beekeeper, but she’s bored with her life and doesn’t care much about the well-being of her bees. Considering her method of beekeeping seems to be entirely based around shooting them with a flamethrower made of a bear’s head (the Ursinerator), selling them as a fuel source is pretty consistent. 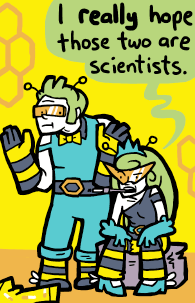 The Ambrose family is the latest branch of a long lineage of beekeepers, apparently. That is appropriately mythic. Her parents have been seen in the strip. Her father is Meliponini, who wielded the Ursinerator before Tringona. Her mother is Queenie, who seems to have the strongest bee control in the family (she is the queen after all) and apparently smoke-control. It’s very clear that in the universe of this comic, beekeepers are the supernatural force I’ve been saying they were all along. 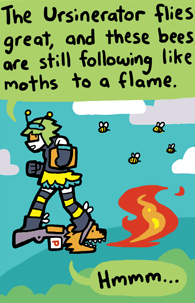 So let’s run down the beekeeping powers Trigona has displayed so far: She’s got an antennae headband that allows her to translate “all bee languages”. She’s got goggles that allow her to track bee energies. The Ursinerator, of course, is a pretty cool flamethrower, but it also flies and functions as a phone. She even has transformation sequences to help her get dressed. In the Beeserker video game, she can double-jump. The Bee-Dome in which she lives, has some handy self-regenerative powers. She has a bit of a weakness for glue-fume-instigated hallucinations, but for the most part that’s a very impressive set of abilities. She’s held her own in many a fight and the fact that’s she’s got so many bees to sell indicates at least some success at keeping her colony active. Though I’d almost bet the bee-dome is self sufficient enough that it’d keep a good colony even if there were no Ambroses there at all.

Four Honeycombs out of Five. Very strong in the adventuresome aspects of the profession, but less so in the beekeeping parts.