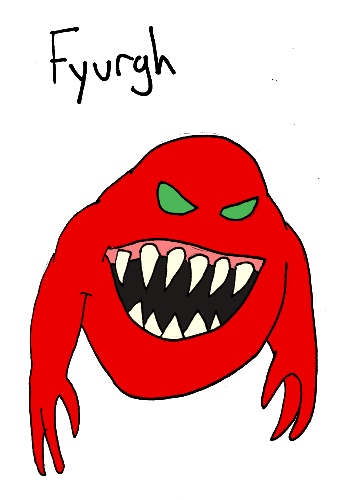 Fyurgh is the kind of demon that just likes to have sacrifices done in his name. If you call him up and show him that you’re willing to kill someone for him, he’ll help you out in whatever way he can (usually by killing someone else). He may not be good at possessing people, or undermining society, or even much of anything at all, but he’s a hard worker and that counts for something.

I’m going back to the Floaty Round Monster well pretty soon after the Tonguecatcher, but only because they’re really, really very easy to draw. This one is less of a Cacodemon/Beholder and more of an evil Slimer, though. Fyurgh looks to me like a demon Adventure Dennis would have slaughtered in about two seconds, but obviously he’d be a tougher fight for basically anyone else. 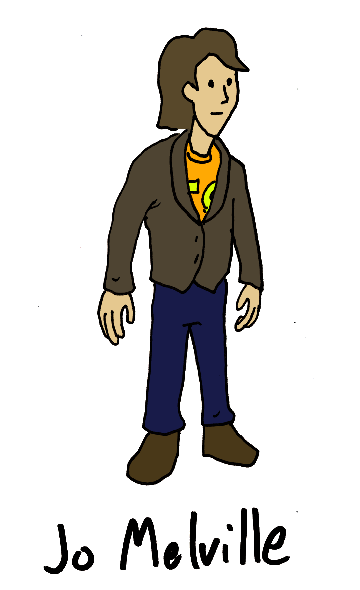 Jo Melville is an ordinary person. She’s not a champion of justice or a fighter of evil, and she doesn’t want to conquer the world or anything. She’d be happy just going about her day like anyone else. But that plan is consistently ruined by a strange mystical power she has: namely, when Jo Melville sleeps, she opens a portal to mental realms through which all manner of spirits and demons can pass, allowing them to take a physical form on Earth.

This makes Jo a hazard in the eyes of people who want to prevent those beings from coming to Earth, it makes her a would-be tool for those who are actively trying to come here, and it makes her the Chosen One to at least one group of ancient wizards who are curious to know if it is possible for physical beings to go through in reverse, heading into the dimension of thought. Jo’s just wants the complication removed from her life, and as time goes on she may try more increasingly desperate ways to accomplish that.

The impetus for this sketch was just browsing through my character sketch folder and noticing a pointed dearth of people who wear normal-people clothes.