Okay, as I got tired of sketching Superheroes and Supervillains I wondered what kind of characters I could sketch next to continue my Super Sundays. Well, if I’m going to go on fleshing out the Universes I have begun, I figured they would need a lot of just strange and supernatural creatures. So today I begin Supernatural Sundays with a couple of real weirdos.

There are, of course, also those humans who see the Unwelcome but don’t have a chance to remember. The Uwelcome does not leave its victims in one piece.

Okay, I drew this sketch during my Supervillains year, but didn’t know what it was about. In the end, when I decided that a more general “Supernatural” Sunday was next, I decided to save it for that. I figure it is a monster from another dimension that blends into humanity by making us utterly incapable of knowing anything about it. 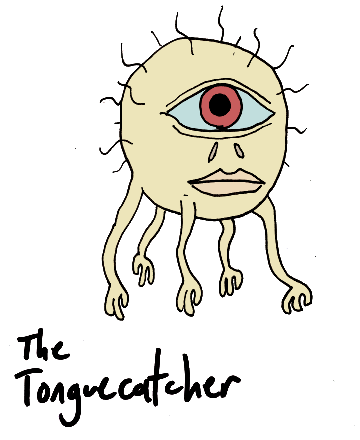 Floating through the night as silent as a balloon, the Tonguecatcher peers through windows at the sleeping populace. If it happens to come across some sleeper with their mouth open, their tongue exposed, the Tonguecatcher will open windows, shake the sleeper awake, grab their tongue and pull. Once it has the tongue separated from the victim (it doesn’t seem to care one way or another if the victim lives or not), it flies off into the distance, though nobody knows where it goes, or what it does with the tongues it has taken.

The idea of a silent being floating around and looking in windows for someone to attack is, I think, generally pretty creepy. That sort of invasion of the place where you are sleeping has got to have been one of the first terrors that humanity dealt with. I always considered the Cacodemons from Doom to be a personal favorite, so I drew some inspiration from that.