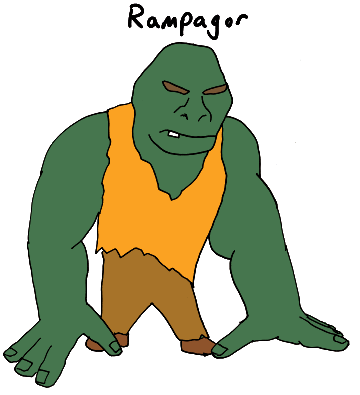 John Hong is not a bad guy, but he has an unfortunate condition. When exposed to certain levels of pollution, John transforms into a hulking monster and proceeds to demolish anything in sight that he deems unnatural. When the monster’s temper wanes, John turns back to normal and has no memory of what happened. While the monster, Rampagor, obviously has to be stopped, the only way to do it seems to be to keep John in a pristine biodome.

Rampagor is a Hulk-style character, but without the idea that underneath it all he’s a hero. Rampagor is a beast that, without superhero intervention, can level cities, but is it right to kill, or even just to imprison John for its actions? That’s the sort of thing we would have to think about in a Rampagor story. 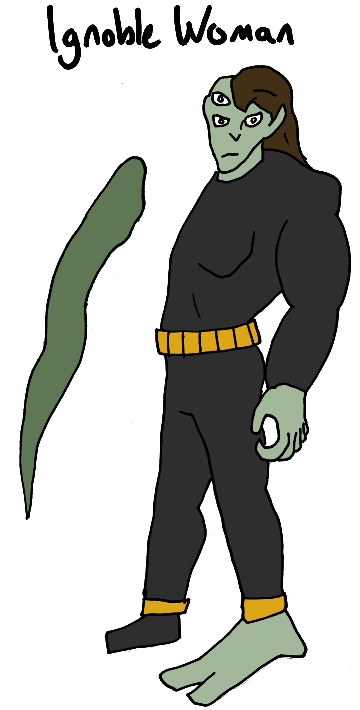 When a being as powerful as Noblewoman shows up, that attracts attention. For scientist Amalia Tiglao, that attention came in the form of jealousy. Why should some superhuman freak get to enjoy the advantages of higher spatial dimensions while she, a scientific genius, was stuck in the limiting three dimensions? It took a lot of work, and some shady deals to acquire funding, but she eventually devised a process that would, in theory, replicate the hero’s powers. Unfortunately, those powers came at a cost, leaving her transformed into a strange and chaotic form. Now Amalia blames Noblewoman for her predicament and, of course, is now a supervillain intent on bringing down the world’s most powerful hero.

One of the things that bugs me most in superhero comics is how “personal” the stakes always have to be. It seems like every series gets to the point where the only thing the hero does is react to villains who are actively driven by their hatred of the hero. I like it when superheroes solve problems for people, not just to be dealing with their own dramas while crumbling cities around them. Anyway, Ignoble Woman is an example of the sort of thing I don’t like, so the stories about her would have to directly deal with all that.

Like the villain Hurtch, Ignoble Woman is a being that extends into higher space, so parts of her, the tentacle arm thing, appears unconnected in three dimensions.